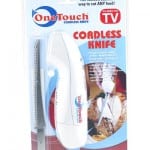 Electric knives have been around for decades but the One Touch Knife is aiming to carve a piece of the market for itself. Its big draw is that it is cordless. By not having a cord it lets you roam about the kitchen without having to worry about an outlet, or about the cord getting in the way of what you’re trying to cut. But can a cordless item like this ever measure up to a corded version?

Overview
Knives are always good sellers, so there’s always a new one hitting the market and trying to make itself the next big thing in the kitchen. American consumers have a seemingly unlimited ability to buy kitchen gadgets. If the price is right they end up picking up most anything that shows any sort of benefit.

The Claim
The One Touch Knife claims that with just one touch you’ll be able to cut through all sorts of things, like vegetables, meats, and cheeses. By providing the benefits of a corded electric knife, in the form of a cordless version, you’ll be able to get the same benefits with the added ability to use it wherever you want.

The Hype
The hype behind the One Touch Knife is that it’s cordless, but will still work as well as a corded electric knife. This is something that would be hard to accomplish, seeing how a corded knife will get consistent and constant power no matter what the blades are up against.

The Cost
The cost of the One Touch Knife if you buy it from Amazon is $25 and ships for free. You’ll have to buy a whopping 6 AA batteries in order to use it, since they are not included with your purchase. This can add a considerable cost to the unit, as well as a recurring cost if you end up using it on a regular basis.

The Commitment
In order to get any sort of your money’s worth of this product you’ll have to use it to cut up foods that you’d normally use a standard knife with. Many people think of electric knives to carve the turkey on Thanksgiving day, or the ham for Christmas dinner. You might consider using the One Touch Knife because of its cordless quality, but will it perform well in the spotlight?

Evaluation
The only thing that the One Touch was able to successfully cut during real world testing was a ripe tomato. For everything else it failed miserably. If you try to carve the turkey with it, or even slice up something relatively easy like ham, you’ll soon find out that there isn’t enough power behind it to get the job done.

Does One Touch Knife Really Work?

No. The One Touch Knife is one of the As-Seen products that is a disappointment. The concept is solid enough, but the execution is lacking. The unit works well when it’s not cutting anything, but the moment you try to slice meat it loses nearly all of its power, even when it’s fully loaded with brand new batteries.

This product should be pulled from the shelves, and it’s amazing that it hasn’t been reduced in price and sold at a steep discount. There’s not really a need for it, because even on the things it can actually cut, like a ripe tomato, you can slice more quickly with a conventional blade.

Our Recommendation
Pass on the One Touch Knife. It doesn’t work the way it is shown to in the commercial, and it really doesn’t need to take up space in your kitchen. There are plenty of good knives out there that don’t need to be powered in order to get the job done. Less moving parts means less chance for a break down, and more chance at it working properly.

Consider getting a set of Miracle Blades, or a Yoshi Blade for your cutting needs. They have more positive reviews, and are more likely to deliver the results that you’re looking for. This is one kitchen gadget that has no place in your home, wait for the next one to come along.

What do you think? Does One Touch Knife really work?

← Previous Do Smart Lidz Really Work?
⚅ back to blog
Next →Does Glass Wizard Really Work?

Customer Review on “Does the One Touch Knife Really Work?”