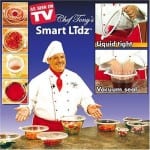 Wrapping and storing foods is a cause of a lot of mess in the kitchen, as well as a lot of spoiled foods gone bad, and Smart Lidz is a beacon of hope for many. Touted by Chef Tony as the best things since sliced bread, these lids are supposed to be able to cover most any container and provide a secure, vacuum seal in an instant. But can it possibly work the way he shows it to?

Overview
Sealing and storing foods always catches the eye of anyone that spends any amount of time in the kitchen. Tupperware and disposable storage containers leave a lot to be desired. They don’t create a good vacuum seal, and many times the lids are hard to seal up completely.

The Claim
Smart Lidz claim to provide a strong, leak-proof seal in just a few seconds. They are shown to be very durable, and can even seal up large and heavy items.

In each package you get one small lid, two medium lids, and one large lid. This let’s you cover a range of containers from a few inches in diameter all the way to about 10 inches.

They also claim that these lids are microwave and dishwasher safe, and you can even put them in the freezer. You can also reuse them again and again, without having to replace them or throw them away.

The Hype
Any time you use Chef Tony as the spokesperson there’s going to be some hype involved. His selling style alone adds enough hype to any product, and he can make you want to buy most any kitchen gadget. Some refute his claim as being a real chef, and say that he’s just in a chef’s uniform, but his ability to make a kitchen product look amazing is indisputable.

The Cost
There are many complaints that the company behind Smart Lidz uses scammy tactics when you try to order, including overcharging your credit card, and charging outrageous shipping charges.

That’s why we recommend bypassing the official sales channel and just picking them up from Amazon. That way you know your credit card is going to be billed properly, and you won’t be charged more than what is stated on the site. You’ll also just recieve one set, instead of having to buy two sets and paying the separate shipping charge.

Right now they have Smart Lidz going for $8.70 which includes free shipping. This is a very reasonable price and having them arrive at your door at this cost takes down any pricing barrier.

Evaluation
When used in a real world test, the Smart Lidz performed as described in the infomercial, keeping their seal on various types of bowls and containers. The test did not involve putting them in the refrigerator, nor did it test the longevity of the seal created, leaving the results as inconclusive.

Negative feedback has come in on these from people who say that once you put the lids into the refrigerator, they lose their seal. It is unclear what type of container these users are trying it on, but this can’t be overlooked because the same complaint is coming from numerous different people.

It is unclear, and the reviews have been mixed. For some Smart Lidz works perfectly as described, both in and out of the refrigerator. For others it only works on certain containers, and doesn’t keep its seal when it’s placed in the fridge. Since this is where most items are going once they are sealed, it’s a major concern.

Since this results of this product in inconclusive, you’ll have to give it a try in your own home and see for yourself whether they work under the conditions that you have in mind.

Our Recommendation
If you order from Amazon you can pick these up for less than $10 and have them shipped free. At this price point there’s no real reason to hem and haw and look at any more reviews. Just pull the trigger on this one because the worst that can happen is you’re out a few bucks, and the best that can happen is you have a great way to store leftover foods.

What do you think? Do Smart Lidz really work?

← Previous Does the Xpress Redi Set Go Really Work?
⚅ back to blog
Next →Does the One Touch Knife Really Work?