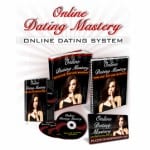 Online Dating Mastery seems like it is just that thing that would be needed if you were thinking of getting into online dating, or if you’ve already tried it with no luck. It says it can help you avoid the pitfalls that most guys run into when trying their hand at it, and promises a behind the scenes glimpse at what it’s like from the woman’s perspective. So let’s see what this program really entails and how well it works.

Overview
With the dawn of the Internet you’d figure it would be easier for all sorts of guys to be able to find dates more easily. Tall, short, fat, skinny, bald, or with a head full of hair, if you can put your personality online then the “there’s someone for everyone” theory should hold true. But as it turns out guys are just as boneheaded online as they are in the real world, and there are all sorts of things they do with online dating that they shouldn’t, even stuff they probably think is a great idea.

The Claim
The claims of Online Dating Mastery are really twofold. They say they’ll tell you what to say and do, but almost as importantly they’ll tell you what NOT to say and do. Combine these two together and they say you’ll be in the 98th percentile of guys that actually have a chance online. It’s just like the real world, you want to do things that separate yourself from the others in the pack, and get a woman to take notice, and ideally, respond. Just showing up online is not enough, you need to somehow create that spark, that drive, to move things from online to offline.

The Hype
Saying you can tell someone the exact things to say to be successful with women is a bit hyped up. It plays on the notion that certain tactics will work with every woman every time. You might be able to learn some things that work with the majority of women, the majority of the time, and that would definitely be better than going in blind and hoping for destiny to take over.

The Cost
Online Dating Mastery is $47 and comes the the system plus four bonuses. It’s sold through ClickBank, so you don’t have to worry about it not working out for you, which is pretty cool, you can try it out without freaking out that you won’t get your money back. This lets you calm down for a few months and really try out and absorb what is in it.

The Commitment
You have to commit yourself to this, and not just expect to cut and paste some stock content and have it work out for you, the way they claim in the pitch. It’s going to give you the structure, the blueprint, and yes, even some exact things to say here and there, but you have to put yourself into the process and breath your own life into it for the best results.

Evaluation
The Online Dating Mastery covers a topic that is sorely needed in today’s times. When more and more people have their nose buried in a smartphone it’s getting more and more difficult to meet people spontaneously in the real world. It seems that all of the good moments where you might have been able to strike up a conversation are now spent with people thumbing away on their phones. So you’ll want to go where everyone already is, get yourself online and go to the source.

The beauty of being online means that you can also increase the number of women that you come into contact with. This makes it much more effective than going through long droughts of being alone, hoping that you meet someone, and then screwing it up when you finally do. This way you can get past the awkward learning curve in a faster time and perfect your skills quickly. This program can save you hours of frustration and potential misery, and for that it’s getting our Thumbs Up recommendation.

Online Dating Mastery is a well-thought-out program that is sure to improve your skills with online dating. It’s still a relatively new arena, with more and more people considering it not such a strange way to meet each other. It’s also a life hack, a way to solve a potentially sticky problem quickly and with little physical effort. It beats the heck out of going to a noisy, sweaty club trying to find the love of your life. By sitting at your computer you can be introduced to a dozen new women that you never would have met otherwise, which is a real game changer.

Our Recommendation
We recommend trying this out and putting it to the test. If you don’t at least try it, you’ll always wonder if it worked or not. You might be battling with fear of success if you’re still dragging your feet on this one. Dust off the credit card and give it a go. You won’t be putting your money on the line here, and if you get one good tidbit, or even one quality date from the whole system you’ll say it was worth it. Don’t let your ego convince you that you are too smart for something like this, you can always learn and see what’s working and what’s not.

What do you think? Does Online Dating Mastery work or not?

← Previous Does MonaVie RVL Really Work?
⚅ back to blog
Next →Does The Dark Side of Fat Loss Really Work?