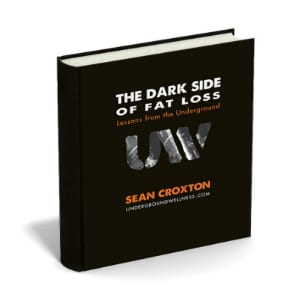 The Dark Side of Fat Loss is designed to show you what the “other side” of dieters is doing, the side that actually gets results. Since the majority of people that try to lose weight and fat end up failing, the other side would be the dark side, the side that nobody really talks about much, the side that doesn’t get a lot of attention. So what makes this fat loss program different from the myriad of other programs out there?

Overview
The first thing you’ll notice about it is that it is trying its best to separate itself from the other programs you’ve seen. The website uses a dark color scheme, and it’s playing on the fact that this is like counterculture movement in the world of weight loss. If other programs are saying to do this, they say to do that. It’s setting the stage that everything you know about losing weight and getting fit is wrong, and they know the right way to do things.

The Claim
The Dark Side of Fat Loss refreshingly claims that they are not a magic bullet, and also states that one doesn’t exist. This is the kind of hard-hitting honesty that is the foundation for this program. They say that buy following their system dispels fat loss myths, teaches you about which hormones effect your weight, how to model successfully healthy people, how to reduce the amount of stress in your life and get more sleep, as well as healing your digestive system and detoxifying your body.

All of their steps, when combined together in an effort of health and well-being, of course as well as fat loss, should get your more results than some of the tired methods of eating less and exercising more dogma you’ve had pushed on you since day one.

The Hype
The hype is that no matter how many times you hear the right way to do something, it doesn’t matter as long as you’re still doing things the same way you used to. Leo Buscaglia said that “to know and not to do is not to know”. So what happens if you buy this, and read it, and then continue on with what you’re already doing, or go on to the next program? That’s why plenty of self improvement books get sold each year, but everyone is still at the same place they’ve always been.

The Cost
Joining the Dark Side of Fat Loss is not as scary as it sounds at $39. You get a full 60 days to try it out to see if it’s your cup of tea. If for any reason you’re not happy during that time you just request a refund and ClickBank takes care of it for you.

The Commitment
The one thing that this side has with the other is that it’s still going to take commitment on your part, but maybe not the sort of commitment you’re used to. It’s basically going to challenge you to drop some old ways of thinking, which takes an open mind and a resolution to try out what he’s saying before immediately poo-pooing it. Some of what’s in there might fly in the face of everything you “know” about eating and working out, but that’s the point. Doing the same things over and over will only lead you to getting more of what you’ve got.

Evaluation
The Dark Side of Fat Loss is definitely taking a unique approach to weight loss, and specifically fat loss. They really seem to get getting to the core of the problem, and not just talking about diet and exercise the way most programs do. The fact of the matter is that very few people are able to stick to any long term program of dieting and exercising, and the ones that do are the ones you see in testimonials and before and after pictures. With diet and exercise you see some results, and as soon as you stop the results go away. That sounds like treating the symptoms of what’s wrong.

By treating what’s really causing you to be overweight, hormonal imbalance, a body full of toxins, too much stress, not enough sleep, and a lot of heavily processed foods, you will naturally start to find balance in your life, and the by product of true well being is that your body starts shedding off the pounds, including fat stores.

Final The Dark Side of Fat Loss Review

The Dark Side of Fat Loss is getting a solid Try rating from us. It’s important to get another perspective on how to lose weight, and also to have certain myths finally debunked so you’re barking up the right tree for once. This program, when followed, should deliver results not just with fat loss, but in a lot of different areas in your life. You’d be surprised how much something like stressing less and getting better sleep permeates into other parts of your day.

Our Recommendation
It’s recommended to try this out and see what you think of what’s on the other side. There’s a strong likelihood that you’ll pick up some great information, and won’t regret the purchase. But if you get it, and really read through it and still feel that it’s not something that sits right with you, simply return it in the first two months. There’s really nothing holding you back from trying it out, unless you’re afraid of what you might find… on the dark side…

What do you think? Does The Dark Side of Fat Loss work or not?

2 Customer Reviews on “Does The Dark Side of Fat Loss Really Work?”