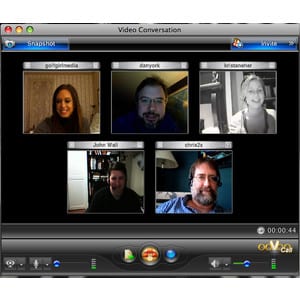 ooVoo is a video chatting service that allows you to have up to 12 consecutive video calls going on at the same time. It’s available for PCs and Macs, Android phones and iPhones, and promises to be better than whatever you’re currently using for video calling. But is it?

Overview
There are plenty of ways to have a video call, perhaps the easiest method is Google Hangouts since it’s already linked to your Google account. There’s also Skype and Facetime, but each one has its potential drawbacks, hiccups or other reasons why you might not want to use it. Eventually there might be one video calling service to rule them all, and ooVoo is making the case that it’s going to be The One.

The Claim
ooVoo claims that nobody else does video chatting as good as they do. It’s a pretty big claim considering that they’re the relative newcomer to an already crowded marketplace. But they also claim that there’s a reason why they’re able to say this.

It’s because they are using the cloud to host their servers so no matter how sophisticated your device you’re still going to get a quality call. They also say that they make adjustments to the video call as your connection gets better or worse so that you’re not left with that annoying lag or choppiness and you have fewer dropped calls.

The Hype
The app gets great reviews and is experiencing rapid growth right now, so it wouldn’t be surprising if it gets bought out by one of the big Internet companies like Facebook, which currently doesn’t have video chatting. There are a substantial amount of users, and since it’s easy to download and get started it doesn’t take much convincing to have a family member or friend that lives far away join on so you can keep in touch easily and with fewer dropped calls.

The Cost
ooVoo is free to use for many of their most frequently used services, including the ability to video chat with 12 different people at once. There are some paid features that you can upgrade if you want to use, such as video conferencing and making phone calls with it. They also offer the ability to record video calls and send files to each other, all with a paid subscription.

The Commitment
It’s easy enough to download and start using ooVoo, and we were up and running in just a few minutes. Removing the software was just as easy, and uninstalled without any problems or annoying processes involved. So there’s really not much to do on your part except for use it just as you would any other video calling service.

Evaluation
Most users can get away with using the free features of ooVoo, which makes this a great app to download to your phone or desktop and give it a whirl. If your friends aren’t using it your biggest challenge might be getting them to get set up with it, but if you both have experienced similar problems using other services it might be an easy sell. Once you’ve got it all set up and you have your contacts on there too it’s just like using any other service you’re used to, except it works a bit better than what you might be used to.

There’s a reason why so many of the biggest Internet companies have invested heavily in video chatting. It’s something everyone will eventually be using on a daily basis, and the company that wins the battle will have the ultimate service that is used by everyone each day. Right now people are scattered between several different options, but one will rise to the top with better features, better quality, and the most users. In much the same way that everyone migrated from MySpace to Facebook, there will likely be a migration to the best video calling service, once the tipping point has been met and it’s been established that that’s where the majority of users are.

The ability to chat with up to 12 friends might seem like an odd feature, but once you see it in action you might get hooked. Of course some are using it as a way to video chat with 12 complete strangers, which can be a trip if you’re into that sort of thing, and others are using it to meet new friends since there are places online where you can meet other ooVoo users with similar interests. In that regard it does have a few advantages over the more traditional services that are only able to show you your friends and contacts.

ooVoo is getting our Thumbs Up rating as far as video call quality goes. Even though Google and Skype have offered the service longer, it seems that ooVoo is doing a better job of delivering quality video calls with multiple people. If you’ve ever experienced a lag on Google Hangouts or on a Skype video call, you’ll realize that it’s not always the best way to go.

Our Recommendation
If you’ve always wanted to video chat with several of your friends and family members at the same time and haven’t had success with Google Hangouts, give ooVoo a try. The software is easy enough to download and install, and the quality is noticeably better than what we’ve gotten used to with other video chatting services.

What do you think? Does ooVoo work or not?

← Previous Does Shutterstock Really Work?
⚅ back to blog
Next →Does Snapfish Really Work?