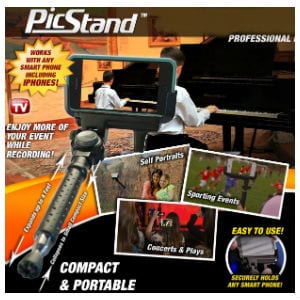 The Pic Stand is a unipod that is supposed to hold your smartphone steady so that you can take better videos and pictures and not have them come out shaky. Sounds like a good idea if you take a lot of video with your phone, but does it really work in practice?

Overview
The cameras on smartphones are getting better and better, and most of them come with the ability to record video. The only problem is that the videos you make with them are typically shaky and hard to watch later. Putting your phone on a tripod would be ideal, but tripods are generally big and bulky so it’s not very practical to carry one of those around. But a unipod is smaller, lighter, and provides many of the same benefits.

The Claim
The makers of the Pic Stand say that it extends up to 4 feet, so you can rest it on the ground and just hold onto it, or you can use it to raise your camera above the crowd and get a better shot. They show side by side video of someone holding a camera and another camera on the Pic Stand. It’s easy to understand why placing your phone on a stand like this would result in videos looking better.

The Hype
Tripods and unipods have been staples in the photography industry for years and years. Now that more and more people are taking photos and videos with smartphones instead of a standalone camera, it’s only natural that they make their way to the smartphone industry. At the same time, smartphone manufacturers are trying to make the cameras better at taking video with a shaky hand and still having it come out looking steady.

The Cost
The total cost of the Pic Stand is $28, and that’s including a $1 “web service fee” something we haven’t seen before in any of the products we’ve reviewed. They say there’s a 60 day money back guarantee in place, so you’ll have a full two months to put it to use and see if there’s a noticeable difference in your videos.

The Commitment
This should reduce the pain of having to hold your phone up to get a good video, which can really put some strain on your shoulders. At the same time it does represent an additional accessory that you’ll have to tote around, even with its “small compact size” it’s going to weigh you down a bit and be kind of a hassle carrying it around, unless you keep it in your glove box as suggested.

Evaluation
The Pic Stand is an idea that has been around in the camera world for quite some time, a unipod, and customized it for smartphones instead of for cameras. They did a good job of making this extend but keeping it relatively small. It’s still a bit bulky though, even when it’s folded up. The best instances for using this camera is any sort of recital or performance where you’ll be holding the phone up for long periods of time.

One thing that might make this a little awkward is that even though they say it’s small enough to fit in your pocket, it’s really not. They show a guy slip it into his pocket but there’s no way you’d want to keep it in there for any length of time. So this is going to be an accessory that you’ll have to lug around, making it something that you’ll want to bring with you only when you know you’ll be in need of it.

We like that this can be made to hold all different types of smartphones, because that means you need just one and can share it amongst friends and family. They’ve also done a good job making it adjustable to you can take self shots, as well as use your phone in landscape (horizontal) mode go wider shots.

The Pic Stand is getting our Solid Buy rating, as it does what it says it does and helps you take better pictures. They give you plenty of time to evaluate it, and since it’s sold at a good price point, if you don’t like it you can return it for most of your money back. At this price point it far less than a monopod for a digital camera, so you can’t go wrong really.

Our Recommendation
If you find that you take lots of video with your smartphone, or you have a big event coming up and wanted to use your smartphone to record it, this would be a good idea. It would also be good to carry along on a big trip where you’re going to be taking lots of selfies, because it does a good job of holding your phone, but you’ll need to use a timer to make it work.

What do you think? Does the Pic Stand work or not?

← Previous Does the Pattern Painter Really Work?
⚅ back to blog
Next →Does Provoxyl Really Work?

2 Customer Reviews on “Does the Pic Stand Really Work?”