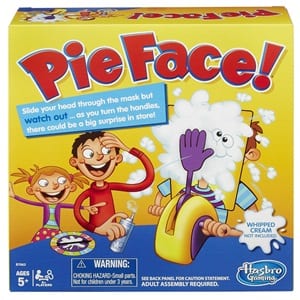 If you have started looking at the toys for this year to buy for those on your gift giving list then don’t rule out fantastic board games like the Pie Face game.

Overview
Now you might find the Pie Face Game a Little Messy but surely the name of the game gives you a clue. What you have to do is put a little whip cream on the sponge that is connected to the hand. Then as each player turns the handles, at any given moment somebody could get splatted in the face with the sponge that is laden with the whip cream. Each time you make it through without getting splatted you earn a point. The first player to gather 25 points wins.

The Claim
The company claims the game is hilarious and just tons of fun.Sure it is silly but then when isn’t fun silly! It is harmless and yes a little messy, but just don’t get carried away with the whipped cream.

The Hype
There just aren’t enough board games that can draw the attention of many different age groups or that don’t come with a big learning process. This game is ideal as a family game and this is all the hype that is needed as it is great for giving the kids a break from the electronics, and for you as the gift buyer it is most affordable.

The Cost
The game sells for around $18.88 depending on where you buy it.

The Commitment
The only commitment you are going to have to make is to be prepared to be whacked in the face with the make believe pie if you happen to be a loser. The Pie Face Game is no doubt going to get you eventually because the kids are going to want to play it many times over.

Evaluation
We love the concept behind the game not just because it is interactive but because it truly is mischievously delightful to see someone get bombed with the whip cream. It is worth having to put up with this happening to yourself once in a while, just so you get to see others react when it happens to them. Be sure to keep plenty of whip cream on hand because you are going to need it.

We are definitely going to give the Pie Face Game a thumbs up review. We have watched several different videos on its use and couldn’t help get caught up in the fun of it just from watching. It is definitely going to be a game enjoyed by young and old alike.

Our Recommendation
You are probably going to find that everybody in the family wants to play and even when you have guests over. You could set up teams or hold tournaments. In any event whether its just two playing or a whole group the Pie Face game is not going to disappoint. One of the features that we like about it too is the flying sponge with the whip cream is not going to end up flying all over the place. The face guard will prevent this. if you are going to buy this for Christmas then really do refrain from testing it first, because if you do it will never end up getting wrapped up to go under the tree for Christmas morning. Another toy your youngsters might be interested in is Bendaroos.

What do you think? Does the Pie Face Game work or not?