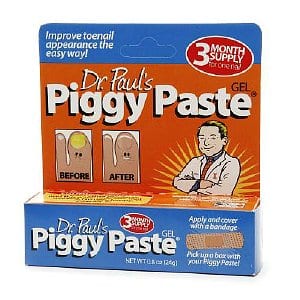 Is Piggy Paste worth it? If you’re suffering from the embarrassment of having to deal with toenail fungus you’re burdened with the difficult task of choosing what to do about such a malady. Plus you’ll have to weed out different fungal creams, sprays, and ointments that turn out to be duds from potentially efficient treatments.

As if that weren’t enough, you’ll also have to decide whether the reward is worth the risk of using quite toxic substances on yourself.

Overview
Many choose not to do anything about their toenail fungus problem, since they consider it a cosmetic issue not worth the side effects of prescription medicine, nor the months that these often take to produce results. However, the serious complications that may arise from toenail fungus range from discomfort while wearing shoes, to painful ingrown nails requiring removal through a surgical procedure known as avulsion.

The Claim
Dr. Paul’s Piggy Paste, which is actually a gel, claims that using their product will allow you to “get back in the game” by making nail fungus problems disappear. While the advertisements that promote it as a remedy to embarrassing situations brought on by publicly displaying unattractive toenails may be enough for impulsive buyers, here is a closer look at the product’s claims for the more discerning customer:

Piggy Paste promises that it can improve the look of your toenails, especially when they get all thick and fungusy, and they try to back up their claim with stats showing that 75% of people that tried it out reported that their toenails looked better, but this was after using it for a full 3 months.

The Hype
The remarkable before and after photographs and testimonials of people that put Piggy Paste to the test certainly seem to validate the media attention that this product has received. The comments of people who had for years struggled to find a solution to their toenail fungus problem demonstrate how thankful they are that their last resort really worked.

The Cost
A tube of nearly one ounce of Piggy Paste, advertised as enough to treat one nail for a 3-month period, retails anywhere from $25 to $29 and can be found in almost every pharmacy across the US. If it works this is a bargain, and of course if it doesn’t it’s a waste of money.

The Commitment
The directions for using this gel are pretty straightforward: Cleanse the toenail, apply a pea size amount near the base of the nail by the cuticle area once per day, and cover the area with a band-aid bandage to allow for 2 hours of contact. You may have to use this for several months, so it’s going to take perseverance on your part.

Evaluation
The overwhelming majority of people who have tested this product seem to have had a surprisingly pleasant experience. Since most of them had been jaded by failed attempts to remove the fungus, Piggy Paste users often seem to be in disbelief at seeing improvement in toenail appearance. Yellow toenails appear noticeably clearer and hardened thick nails are softer.

The gel works on the cuticle area where the nail grows outward, therefore the speed of the results will vary depending on how quickly your toenails grow out. So do not be alarmed if you try this product and you take longer to see the results that are typically seen within the 12-week period that it generally takes to see them.

Possible Drawbacks
There are some users that have reported a burning sensation in the cuticle area, but they are often so impressed by the results that they see after prolonged use that they continue to use the gel in spite of it. Some users have complained that their cuticle area not only burns, but is also accompanied by a discomforting bright red soreness. However, these seem to compose the minority of the cases and they themselves admit that they may have a specific reaction to the ingredients found in Piggy Paste. If you have any contact allergies to vinegar (acetic acid), thymol, or propylene do not use this product as it contains these ingredients.

Some might consider this a pricey product, but it seems to deliver peace of mind and confidence in public spaces such as the pool, beach, and gym where someone suffering from toenail fungus might feel uncomfortable. But the price of this product seems more than fair when compared to its alternatives: the cost of prescription medicine and laser treatments. Furthermore, using Piggy Paste does not interfere with prescription medicine, as other toenail fungus medications might, and does not require an inconvenient laser procedure but can be done in your own time and home.

Our Recommendation
Piggy Paste is certainly worth a try. The minimal effort, a simple daily application lasting 2 hours, and the likely reward make this product a very safe bet.

What do you think? Does Piggy Paste work or not?

← Previous Does Joint Juice Really Work?
⚅ back to blog
Next →Does Minute Curls Really Work?