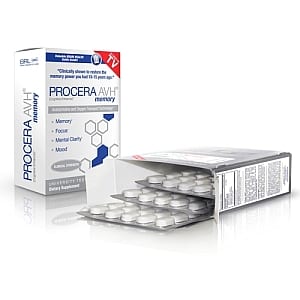 Procera AVH says that it’s been clinically shown to get your memory back to the way it was 10 or 15 years ago. This is obviously aimed at the baby boomer crowd, which many companies are targeting because of the size of the market. A lot of people are calling it a scam, so we had to pull out our magnifying glass and do some detective work to see what’s really going on here.

Overview
Anytime you see a company marketing a supplement that is designed to improve brain functioning, a lot of red flags should go off. This is because it is such a subjective thing that there’s really no way that you can prove or disprove that the product is working. Any time that happens, it works in the favor of the company. For example, if they lead you to believe that you’ll have increased mental capacity, and show you a bunch of testimonials from people saying that it in fact works for them, you might think that it is your fault that the product is not working for you.

The Claim
The makers of Procera AVH say that their product can help you if you are experiencing poor memory, poor concentration, or brain fog. They say that their supplement will give you improved mental clarity, allow you to focus and help you concentrate. They also say that your ability to learn information will increase, and you’ll be able to recall what you already know much faster. They also say that you be able to think more sharply and have an increase in mental energy.

The result of all of this is that you be elevating your mood and improving your self-confidence. They say that you’ll also feel less anxiety and stress, since you won’t be beating yourself up so much about forgetting things and not being able to concentrate.

They also claim that this has been validated in clinical trials and the results were even published in a peer-reviewed medical journal. They stick to the claim that this takes off 10 to 15 years off memory loss, and that they can prove the results in anyone that takes it by giving them simple brain and memory tests.

The Hype
It comes from the fact that there are millions and millions of baby boomers that want to avoid getting Alzheimer’s and other mental disorders as they age. The desire to stay mentally alert and aware even in old age is so strong that it is easy to get lured into something like this.

The Cost
You can get one bottle of Procera AVH $58, or you can go with a three bottle option for $120.

The Commitment
When a product is sold in pill form it brings your commitment down to just popping the pill. And that’s all that’s required here, since the magic is supposed to be happening in your brain, and there is not much you can do to enhance the effects of the pill. You should commit to taking it long enough to see results, and also take the time to perform the mental tests in order to properly gauge the results.

Evaluation
The way they say Procera AVH works is that it oxygenates the brain cells in order to revitalize your brain. This supposedly protects the brain from free radicals, which are caused by stress and toxins from the environment. It also says that it helps to bring certain neurotransmitters back to life, which sharpens your brain. For one little pill to do all of that, without being developed by a giant pharmaceutical company is pretty far-fetched. Not to say that a company couldn’t invest in the research and development necessary to stumble onto this finding, but if they did they probably wouldn’t sell it for $40 a bottle.

Is Procera a Scam?
A lot of disgruntled customers like to toss around the word scam, so much so that it’s almost lost its meaning. For Procera to be a scam it would mean they were putting out a supplement that basically amounts to a sugar pill, and making a lot of exaggerated claims about it. As far as we can tell, this just might be, as the majority of users are saying that it doesn’t work, even after 30 days. However, one person’s perception is just that. There’s no way to be sure that they took the included memory tests to objectively determine whether or not they had any improvement.

Procera AVH most likely doesn’t work, based on the fact that actual users have reported finding no results after taking it for an extended period of time. If you look at it from a business standpoint, they really have nothing to lose as far as making claims on the product, and then being called a scam. People will still buy it in hopes that it works for them, and some people may believe that it will work so much that they end up getting the placebo effect and reordering.

Our Recommendation
You can safely avoid taking this pill, and still get the benefits of a sharper mind and improved focus by strengthening your brain through mental exercises. It has been found that even something like learning a second language will help you stay sharp, and keep your brain active. A good thing about getting older is you work less and less, and have more time on your hands than ever before so that you can really immerse yourself in a hobby, or some other form of mental activity to keep your brain fresh.

What do you think? Does Procera AVH work or not?

← Previous Does Stem Cell Therapy Cream Really Work on Wrinkles?
⚅ back to blog
Next →Does Prosvent Really Help the Prostate & to Pee Less?

23 Customer Reviews on “Is Procera AVH Really a Scam?”