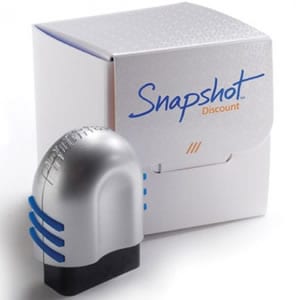 You’ve likely seen a Progressive Snapshot ad on TV with the ever-present Flo stating that it can help you reduce your premiums if you have safe driving habits. It’s a little device that you install in your car that tracks things like when you drive, how far, how many times you hit the brakes too hard, and how fast you drive. The promise is that if you are a safe driver you’ll get instant discounts. But how well does it really work?

Overview
The folks at Progressive promise that they aren’t tracking your whereabouts with a GPS device, and they also aren’t taking pictures as you drive around. The basic theory is that this is getting into a more personalized way of calculating insurance premiums, with the outcome being that bad drivers would pay more, and good drivers would be rewarded for following traffic rules and safe driving practices.

The Claim
If you use Progressive Snapshot your rate can only go down, they promise that you won’t be penalized if you fall into the bad side of drivers. They also claim that you can save up to 30%, but then clarify that the average driver is saving between 10 and 15 percent. It’s up to you to decide whether this level of savings is worth going through the process of ordering, installing, and then returning the unit.

The Hype
They’ve promoted this service rather heavily in recent months, and it must be providing them with a lot of useful data on people’s actual driving habits, and accurately pricing their policies so they make sure they’re not giving a discounted rate to a driver that is likely to file a claim in the near future. Some people feel this is too big brothery for them, and have decided not to go with it. Others are happy to try for a discount, and don’t mind basic information being sent to them.

The Cost
They’ll send you a Progressive Snapshot device for free, so you can only save money by using it. So what’s in it for them? They’re able to get data that they can use to calculate more accurate insurance tables and make sure that they’re running their business optimally. The data these insurers use is getting more and more accurate, but getting actual results from real users is enlightening to them, and they can make adjustments in their rates overall, leading to a bigger bottom line, and potentially happier customers that get reduced rates and stay on longer.

If you’re in a state that has a fee involved, it will show up on your statement and is $5 a month. Progressive says this is to help offset the cost of sending out the unit and transmitting the data. You might want to verify with an agent whether or not your state is included in the list of states that have a fee.

The Commitment
You’ll have to install the device yourself, and for most people it won’t be too hard. There are YouTube videos that walk you through the process, but if you’re totally unfamiliar with a car’s dashboard, you might want to get someone else to do it for you. Once it’s plugged in you don’t have to do anything to it, you just drive like normal, although most people will try to be on their best behavior to try and get the discount.

Evaluation
Most people that have tried Progressive Snapshot have said that they were able to get an initial discount that was rather attractive, and overall they ended up saving money each year. What this doesn’t take into account is whether your discounted rate would be better than going with a different insurer like Esurance or State Farm. You’ll still have to size up Progressive against competing rates to make sure that you’re getting the best deal, but the insight you’ll gain on your own driving habits might be worth giving it a go.

What’s interesting is that there hasn’t been too many complaints that the device is inaccurate. Most likely the bad drivers out there that try this out are too bashful to admit that they’ve got risky driving habits. Also, since the most that a driver can save is 30% and the average is 10-15%, it means that some people aren’t saving anything, some people are saving the max, and the biggest part of the bell curve are safe drivers, but not that safe, or at least not safe enough to get the maximum discount.

Progressive Snapshot gets the Thumbs Up for a trial run. It doesn’t cost anything and can only lower your rate, so if you’re already a Progressive customer it’s in your best interest to see if you can save money. Even though some people say it’s an invasion of privacy, they’re not tracking where you are, and the information they’re receiving is not really useful in doing anything other than trying to figure out if you’re a risk or not when you drive. Plus, no one is forcing you to try it out, so if it’s not your cup of tea then don’t bother with it.

Our Recommendation
We say give it a try if you believe that you’re a good driver, and if you’re already with Progressive. It’s probably not worth switching insurers over, and if you’re relatively happy with your insurance provider and are satisfied with the rate you’re getting, it’s a good idea to stay put.

What do you think? Does Progressive Snapshot work or not?