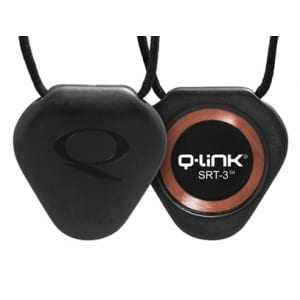 Q-Link Pendants are supposed to help with the electromagnetic chaos that is running rampant the further we go down the technology rabbit hole. If you go along with the claims, you’ll be protected from all sorts of frequencies that disturb your own natural energies. But how well can something like this really work?

Overview
Few can deny that we live in an increasingly hectic environment, and that’s just the things we can see. If you stop to consider all of the gadgets and devices we use these days that are emitting invisible waves and frequencies it becomes mind-boggling. The pervasiveness of WiFi is just one very obvious indication of how many invisible beams are being broadcast all around us. You may not have given them much thought, after all there’s not much you can do about them as far as getting the world to stop using wireless devices.

The Claim
The claim of Q-Link is that their pendants and other products help to neutralize the EMF chaos around you, allowing your body to maintain its natural energy balance without the interference that these electromagnetic frequencies cause.

The Hype
At the end of the day you’re talking about invisible frequencies, wavelengths, and a product that doesn’t do anything that is visible to the naked eye. Much of this is going to come down to how much you believe that a) there is a problem, and b) that this product works to fix it. So really there are two sales being made here. They have to get you to agree that EMF overload is a problem that is effecting your body and mind, and then they have to get you on board with the idea that their product works to fix this.

The Cost
You can get their most advanced pendant, which they say uses SRT-3 technology, for $100 or less if you are able to get it during a sale, or when they send you a promotional code if you sign up for their email list. They also make different models that can be $300 or more. They have bracelets that can be worn on the wrist, as well as discs that can be affixed to a cell phone or other wireless device, and

The Commitment
All that you are required to do after purchase is wear it 24/7. You can wear it while you sleep, as well as in the shower. You don’t ever have to take it off, and they say it’s best to leave it on as much as possible so that your body and the device can sync up as strongly as they can, which improves the effectiveness and provides the best results.

Evaluation
When you get the Q-Link pendant it’s not really much to look at. It has a plastic housing and a copper-looking circular wire in the middle of it. It might make you think that you’ve wasted your money when you first get it. There are no movable parts, it doesn’t need to be plugged in or charged up, it’s waterproof, sweatproof, and otherwise really tough to break or scuff up. If you thought it would actually “do” something, you might also be disappointed. It simply hangs from your neck.

They say that the best place to wear it is hung from your neck so that it rests in the middle of your chest. They also say that you should keep it in the same place as much as you can. Some of their other products are not pendants, but rather discs that you can keep in your pocket, or other USB powered devices that plug into your computer to neutralize all of the frequencies that your computer emits.

If you’re waiting for the scientific proof that this works, you’ll probably be waiting around for a long time. Science generally writes off the idea of products like these working, so there is a general bias when tests are performed. The real proof is in trying it out and seeing if it provides you with any of the reported benefits. The reason that looking at reviews doesn’t really work in this instance is because there are just as many people that will foo foo this away as there are that will try it and like what it does. These are only individual opinions, and each person will come into the situation with their own preconceived notions and feelings about what will happen when they use it.

After trying out a Q-Link pendant for over a year, we have to say that it did provide some results as far as making us feel better overall, and get more work done when sitting at a computer. The appeal for us was that it was supposed to help you when you’re working at a computer, since it is such a strong source for different problematic frequencies like WiFi, and it would always be quite draining to sit for long periods of writing and web management. Wearing the pendant just became second nature and it did seem to help with mental clarity, focus, and with sustaining longer periods of work and productivity.

We went into the purchase a bit skeptical, and starting using it on the basis of “why not?”, trying to do our best to remain neutral and simply observe the results. We’re well aware of the placebo effect, and how spending $100 will make you want it to work. Do we have any scientific proof of our findings? No. But after not wearing it for a few months now, the difference is clear and we’ll be getting a replacement in the very near future.

Our Recommendation
If you do a lot of work in a cubicle, or just an office in general with so many computers, cell phones, and WiFi signals surrounding you, you might want to give this a try and see if you respond to it. They have a 30 day money back guarantee, which is plenty of time to make up your mind and request a refund if you don’t like what you’re getting.

What do you think? Do Q-Link Pendants work or not?

← Previous Does Orajel Single Dose Really Work?
⚅ back to blog
Next →Does Virool Really Work?