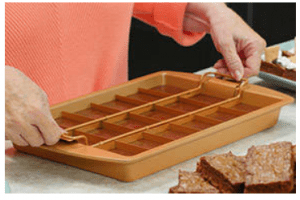 You may be starting your baking for the festive season and if so then this might be something that is going to make you a star with your family when it comes to preparing amazing baked goods. So check out this Red Copper Brownie Bonanza.

Overview
The Red Copper Brownie Bonanza is a really unique baking dish that lets you cook more than just brownies. Once you have baked your brownies in this pan it will automatically cut them for you with the handy insert that you will be using during the baking process.

The Claim
The promoters of the Red Copper Brownie Bonanza claim that you can cook some amazing baked goods in this pan beside brownies. Then the insert cuts the baked item into handy serving pieces. Not only that it comes with a cooling serving tray. Basically baking doesn’t get any easier than this.

The Hype
The hype really is that with the Red Copper Brownie Bonanza pan you have everything you need to cut, cool and serve it can be found with this pan. Plus, it is supposed to let you just slide out your baked item, and the pan should be easy to clean.

The Cost
The cost for the Red Copper Brownie Bonanza is $19.99 plus $7.99 shipping and handling. If you pay an extra $9.99 shipping you get an extra pan. Plus you get a free recipe book and a pan for cooking donuts. So overall this is a pretty good deal.

The Commitment
The commitment you are going to have to make with the Red Copper Brownie Bonanza is to set some time aside to do a lot of baking.

Evaluation
The Red Copper Brownie Bonanza pan really is a very innovative idea. It is a big time saver when it comes to having to cut the baked goods and for the cleanup too. In addition to this you can cook so many other baked dishes in it. The recipe book will give you plenty of ideas for this. The only hesitation we have with this is that a lot of people who bought the Gotham steel pan which were put out by Telebrands were not impressed with it. So this creates some concern as to whether the red copper in this Red Copper Brownie Bonanza is going to create the same disappointment.

We would love to give this pan a thumbs up which we do for its innovative idea. However overall we are going to give it a try/buy rating, simply because we are not totally convinced about the quality or integrity of the red copper coating. Until there is a lot more proof that this really is non stick or that it is not going to damage easily we are not totally sold on it. There is a similar version to this Pan on Amazon called the Gotham Steel which has a few reviews all of which are positive. There is no saying though that this Red Copper Brownie Bonanza is one in the same or that they are the same materials.

Our Recommendation
If you want to take a closer look at a pan that is touted as the Gotham Steel then check out our review and the comments about it.

What do you think? Does the Red Copper Brownie Bonanza work or not?

← Previous Do Super Sliders Really Work?
⚅ back to blog
Next →Does Home Chef Really Work?