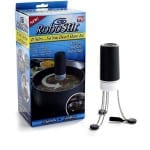 Most consumers are keen to find ways where they can save more money. One of the most common alternatives is opting to cook delicious foods at home instead of going to out to restaurants, which unavoidably costs more. Preparing meals at home is a tough job, which requires the help of kitchen appliances to achieve the best taste with the least hassle. There are many tasks in cooking, which includes dicing, slicing, and most especially, stirring.

Preparing some food might take many hours, which is why you need an extra arm to help you get the job done quicker. But now, with just a single press of a button, your food is automatically stirred by the RoboStir. With this new invention, you get to do multiple things all at once.

Overview
The RoboStir is a battery-operated appliance used in the kitchen, which stirs any liquid-based product. With just a single click of the button, your work is almost done. This appliance has three metal arms each with silicon feet. It is billed as a revolutionary item in your pan. The device ensures that it will leave no scratches on your pans, and moves around to prevent burning and sticking. What makes the RoboStir even more versatile is that it can be used in any kind of pot, whether stainless, iron, or ceramic. Moreover, it has speeds that can be adjusted according to the temperature of the recipe.

The Claim
The makers of the RoboStir created the product to fix the common complaint of having to babysit food. This is most especially useful to busy cooks, or those that cook a lot of Italian foods with lots of sauces. RoboStir claims to be very useful in making soups, gravy, sauces, stews, and any other liquid-based foods. The RoboStir can withstand temperatures of even 200 degrees, can be used on non-stick surfaces, and is safe for the dishwasher. RoboStir ensures that no spot or part of a dish is left unstirred.

The Hype
Infomercials have spread over the Internet that captured the hearts of would-be buyers, either as gifts or for personal use. In the ads, the actual use and directions are shown, and this is a way to effectively market the product and educate prospective consumers. These have proven effective as instant purchases have been made. Once viewed, the desire to buy is implanted and it instantly creates the demand. After trying RoboStir for themselves, these users in turn submitted their own reviews of the product and added more proof to its efficiency.

The Cost
The RoboStir costs $10.99, excluding the shipping fee and handling, which could cost up to $6.99. The buyer receives a bonus on the TV offer and on the web offer as well. There have been several complaints from those that ordered direct from the manufacturer, stating that they were duped into ordering several more units than they intended, and that the order is processed without showing the customer the order total. Only after your card is shown do you realize how much you’ve just spent or what you’ve ordered.

Buying from a more trusted site like Amazon will insure that you get the right quantity and also how much you’re being charged.

The Commitment
RoboStir is not used on dense foods like dough. So before purchasing the product, always know its limitations and what it can and cannot do. In addition, batteries always need to be checked since it does not have any other power source. You’ll have to remember to use RoboStir when the need arises. It can be an easy gadget to forget about, since most times we stir things and don’t think about it. This is one example where they exaggerated the need for a product in hopes that you’ll buy it before you think about what you’re doing.

Evaluation
Reviews are mixed when it comes to RoboStir, with some saying that it works according to the ads, but others saying it’s a piece of junk that should be avoided entirely. Real world testing shows that it is not able to stir anything too thick, that it doesn’t cover the entire surface area of a pot or pan like it says it does, and that one of it’s warnings is to not leave it unattended, thereby defeating the point entirely.

Even if it worked like it shows, you probably don’t even need one. Clear the images of RoboStir from your mind and ask yourself if stirring food really causes that much disaster for you in the kitchen. It most likely is just a minor annoyance caused by some recipes. Once you realize that you’ve jumped aboard the RoboStir bandwagon, it’s easy enough to hop off.

Our Recommendation
If you’re still bent on owning one, or trying it out for yourself, go ahead and grab one. It’s cheap enough so that you can test it out in your own kitchen and see if you’re one of the exceptions.

What do you think? Does the RoboStir work or not?

← Previous Does Tinnitus Miracle Really Work?
⚅ back to blog
Next →Does Press Dough Really Work?