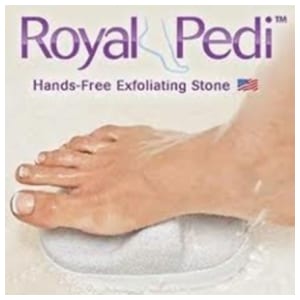 The Royal Pedi is a pumice stone that sticks to the bottom of your shower, allowing you to buff your feet while standing up. They say that it will stay in place and not grow any mold on it, but how well does it work at getting those rough patches on your feet smoothed out?

Overview
Keeping your feel callus free requires consistent upkeep. If your feet get rough easily, either from wearing sandals or shoes that rub against your heels, it might seem like they are always in need of some pumice work. It’s a pretty tedious task no matter which way you look at it, so any product that can make it easier and less troublesome is a godsend.

The Claim
The makers of Royal Pedi claim that this will stick to your bathtub floor and it won’t get all moldy and slimy from being wet and having dirty water splash on it all the time. They say that it is infused with bacteria killing substances during the manufacturing process so it maintains itself even over the long term, providing you with lots of use and consistent results.

The Hype
The feet have been getting a lot of attention lately as more and more products come out attempting to provide you with amazing feet in short order. Since most people happily ignore their feet until they get out of control, this is actually a good thing that good foot care is getting more of a public awareness.

The Cost
You get 2 Royal Pedi sets as well as a tube of foot cream for $36, which includes shipping. Most times you don’t really need that second item, but since these are likely to wear out given enough use it’s nice to have a back up for a replacement down the road, and a quality foot cream is usually the one-two punch that gets feet looking good again.

The Commitment
Once you install this to your tub you will only have to use it as needed to get your feet smooth and then keep them smooth. Since you don’t have to bend down to do it this represents a reduction in the amount of effort it takes to try to buff your feet either while sitting or crouching down. Of course it requires more effort on your part than going in to a salon to have a pedicure done.

Evaluation
The Royal Pedi gets good reviews from those that have tried it, and some of the common things that are said about it is that it’s much easier than other methods they’ve tried, and they like that it’s always there each day when they shower, so it makes keeping up with it easier. It’s like having a built in reminder to keep the feet smooth and callus free, so they don’t get out of control and you don’t have to spend lots of time getting them back to normal.

Since upkeep is the hardest part of foot care, this product has a lot going for it. Because they’ve sorted out the problem of having an item live on your bathtub floor, this should make it so you don’t have to move it once it’s in place, and if you put it toward the back of the tub you won’t have to step around it while you take the rest of your shower.

We’re giving the Royal Pedi our Thumbs Up rating because it has a lot going for it. One of the nice benefits is that all of the mess you make just washes down the drain, so you’re not left with a bunch of dead skin everywhere. It’s also a good way to do things because you can get some good leverage with your legs rather than using elbow grease with your arms.

Things like the Ped Egg are nice, but they do require a significant amount of effort on your part. When you’re in the shower your feet are already wet, and the skin is loosened so you’re able to more effortlessly slough it off. Also, with any of the foot stones and files you’re left with a pile of dead skin which can be quite a mess to clean up, and kind of gross when you think about it. Watching it all just go down the drain is one of the better features of this.

Our Recommendation
Be sure to combine this with a nice buffer, since it isn’t designed to give your feet a super fine finish. You can also follow up with a good food cream so that your feet are in seventh heaven. When you run out of the foot cream it comes with there are a lot of highly rated foot creams out there that can get your feet looking and feeling like magic.

What do you think? Does Royal Pedi work or not?

← Previous Does the Instant Trainer Really Work?
⚅ back to blog
Next →Does Sytropin Really Work?