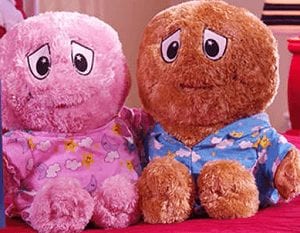 A lot of kids really kick up a fuss at bedtime and it ends up becoming an unpleasant struggle for the both the parents and the youngster. When the regular story at bedtime just doesn’t seem to be the solution then maybe with some help from Shnoozles, bedtime struggles will become a thing of the past.

Overview
A lot of parents work very hard at creating a soothing bedtime atmosphere but it often ends up with both the little one and Mom or Dad becoming frustrated. The Shnoozles is a cuddly stuffed animal that comes with a few of its own related story books that help to entice sleep. This little stuffed fury friend closes his eyes, so the kids can relate to this. The booklet is poem based which helps to set the relaxation theme.

The Claim
The company claims that this sleep time solution creates a bedtime ritual. The kids get used to the routine which means that even when the parents aren’t there at bedtime, the sitter can use this routine which makes it more comfortable for the kids. The claim is made that the combination of this fuzzy toy and related book creates sound and healthy sleep.

The Hype
The hype focuses around providing the solution for many of the struggles that a lot of parents face at bedtime. The big focus here is that the plush and snugly toy will close its eyes which is the indicator for the little one that his or her new best friend is ready for sleep, so they should be too. The fact that the toy is cuddly and soft is something that is often appealing to the little ones is the first selling feature. Then the uniqueness of the closing eyes creates the logic of this bedtime toy. Combine this with still creating the interaction of parent child with the book that comes with Shnoozles and the hype has been aptly covered.

The Cost
Shnoozles is going to cost you about $28. which includes the shipping and handling. Included as the bonus is the Shleepy Time Rhyme Book. If you want to pay approx. $8. more for shipping and handling you can get a second book called, And Next Came a Roar. When ordering you will have the choice of Shah Shah which is the girl version of Shnoozles, or Shu Shu which is the boy.

The Commitment
The big job will be for you as the parent. You are going to have to present Shnoozles to your young one with some enthusiasm, and make a big deal of how this little stuffed toy needs his daily sleep too. Your excitement will help to stir up your youngster’s enthusiasm. Then the next step will be to set up the routine of the Shnoozle bedtime ritual. This will mean reading the bedtime story and then closing the toy’s eyes so your child get the message it’s bedtime and will follow along.

Evaluation
The concept of this children’s sleep aid is a good one. It has received two awards as such with one being the Mom’s Choice Award, and the other 2013 Top Toy from Creative Child Magazine. We are very pro interactive toys as you can see by other toys of this type that we have reviewed. Shnoozles is also offered on Amazon and we wanted to see what the buyer reaction was here towards these. We found that the majority of the reviews were favorable.

We are going to give this child’s sleep enhancement a solid try/buy rating. We can to this conclusion based on the concept being a good one. Plus, it has received some good awards, and finally the reviews of those that have purchased it are quite good. The only drawback is the limited selection of books. The product is being promoted as a unit. The stuffed toy plus the relaxing book sets the sleepy time regime. With only two books being available it is not likely the youngster is going to want to hear the same two stories repeated night after night. So this means you are going to have to seek out some additional soothing type bedtime stories to utilize.

Our Recommendation
The price for the Shnoozles sleep aid is quite reasonable, so if you have bedtime difficulties with your youngster then it may be well worth giving this product a try. Just remember when seeking out additional books to buy those along the same line as the books that come with item. It is rhyme type book which is likely to help with the relaxation prior to sleep.

What do you think? Does Shnoozles work or not?