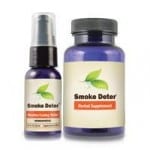 Choosing to quit smoking is a commendable thing, and Smoke Deter is designed to help you do just that. If you tried to quit in the past, or if this is your first time, they say that this will help you get past cravings, and feel better during the process, increasing your chance of success.

Overview
Smoking cessation is not only good for you but also for everyone around you. As more and more places go smoke-free it becomes more and more inconvenient to smoke, not to mention all of the negative health problems that you’re more than likely aware of. The longer you have been smoking the more important it is to quit as soon as possible, but also the harder it will be to quit because the habit is so ingrained.

The Claim
Smoke Deter claims that it’s a homeopathic remedy that combines many successful all-natural remedies to the symptoms of quitting smoking, all-in-one product. They say that it’s an oral spray that you spray under the tongue, which means it gets into the bloodstream quickly to help fight cravings, moodiness, and other symptoms.

The Hype
The hype comes from the fact that this is a homeopathic remedy. If you’re not familiar with homeopathy, it’s basically almost all water with just a very small amount of active ingredient in it. The theory is that by diluting the mixture again and again, and shaking it up, you amplify the energy from the active ingredient many times over.

Whether you believe that this is effective or not will greatly affect how you perceive the product and what sort of benefits you experience. This is because the placebo effect largely depends on these factors. When you’re talking about quitting smoking, belief is a very important part of the process. Self-efficacy is a huge part of whether or not you will be able to succeed. You have to believe that you can succeed or you won’t have any luck. If you believe that Smoke Deter will help you, it just might.

The Cost
Smoke Deter is pretty expensive, since it’s an all-natural product that’s heavily diluted you would expect it to be lower in price. It’s $40 for a one-month supply which includes shipping. For something that so many people have said doesn’t work this seems rather exorbitant and is probably something that was purchased by those who haven’t done their research.

The Commitment
Being committed to quitting smoking is perhaps the biggest factor in whether or not you’ll be successful. If you don’t have a very strong desire to quit, you probably won’t be able to stick with any form of program, let alone something as simple as spraying an oral spray under your tongue.

Evaluation
Although Smoke Deter sounds good in theory, many theories don’t pan out in the real world. Their thinking was to you combine many different single ingredients that have been found to work on individual symptoms. This would create a compounding effect and the results should be ultra-effective. The fallacy of this thinking is that ingredients don’t always interact this way. You can’t just go mixing anything you want together and expect them to maintain the properties they had when they were used singly.

The other problem is that these ingredients were probably not used in a homeopathic way when used alone. If you take something at full strength that works on its own and dilute it many times over, all the while combining it with other ingredients at diluted consistencies the resulting product you have will be nothing like its former self.

It is interesting to note that by touting this as a homeopathic remedy they’re basically admitting that is mostly water. The feedback users are giving is very similar to the feedback one would give if they were given a placebo pill instead of the real thing. They are reporting that absolutely nothing happened, and there is no difference at all to their symptoms. It is also interesting to note that one of their selling points is that there is no side effects. Of course, if something was 99.99% water you wouldn’t expect it to have any side effects.

Some of the reasons why it’s so hard to stop smoking:

Judging by the available feedback for Smoke Deter we have to say that this does not work. The overwhelming consensus is that it doesn’t do anything, and is a waste of money. The few users that said it worked wonders seemed almost too exuberant, to the point of suspicion. We could not find a single happy user that didn’t seem like a shill for the company that makes it.

With so many smoking cessation products available with better reviews and more plausible reasons as to why they’d work, were going to recommend staying away from Smoke Deter and go with a more reliable method. We’re pretty sure that this is mostly water with a little bit of natural ingredients added to give it flavor so you don’t think it’s just water.

Our Recommendation
You probably know many of the reasons why you shouldn’t smoke. You’ve probably heard from many sources how hard it is to quit, especially if you’ve been smoking for a long time. So you may need something more powerful than these oral applications in order to have success. We don’t recommend Smoke Deter, and we’ll keep researching different quit smoking products until we find something that we can recommend.

What do you think? Does Smoke Deter work or not?

← Previous Does Latavi Really Work?
⚅ back to blog
Next →Does the Lint Lizard Really Work?