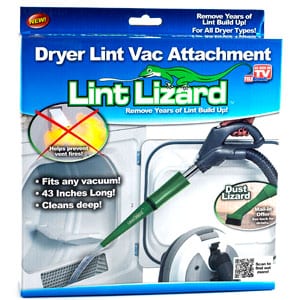 Lint Lizard hopes to be the vacuum attachment that’s been missing from your life all this time. The standard attachments that come with many vacuums designed to get into nooks and crannies usually only go so far. Enter the Lint Lizard, with it’s specially designed shape you can get where you couldn’t before. We had to test it out to see if it lives up to its claims.

Overview
When your dryer was brand-new out-of-the-box it probably dried the clothes quickly. Over time, you may have noticed that it’s been taking longer and longer to get your clothes dry, and even when the dryer says they’re done your clothes still feel a little damp.

The theory here is that your dryer is not working at full capacity because it has so much lint backed up in its ventilation system. It sounds logical, but is this really the cause of low performance in your dryer, and will the Lint Lizard be the solution it claims to be?

The Claim
Lint Lizard is a rather simple idea. It’s an attachment for your vacuum that is designed to get into the hardest to reach places in your home, especially in the lint trap of your dryer. The claim is that it will be able to get all of the lint out of your dryer ducts, the stuff that gets past the lint screen. Over time this builds up, and if left unchecked can make it hard for your dryer to do its job.

They say it’s like a magic wand that gets lint and dust from around your home, or in places that you just can’t reach with conventional vacuum cleaner attachments. We don’t know if we’d call it a magic wand, it’s just a thick, curved tube that attached to a larger device that is meant to fit your vacuum hose.

The Hype
The hype comes from how much they say your dryer is lagging behind because of how much lint it has in it. While many news reports have said that you should keep your lint ducts clear to avoid a fire hazard, there have been few reports saying that your dryer will suffer performance issues if there’s too much lint in it. Most people will give this a try just because of the fear of causing a fire.

The Cost
Lint Lizard is $25 when it’s all said and done, but you get two of them plus you get an extra bonus, the Dust Dragon. So you get three items shipped to your door for $25. It’s not really justifiable why you would need two Lint Lizards, other than they want to pad your order total. Maybe you could give the extra one to a friend, or just keep it handy in case the first one breaks.

Evaluation
Attaching Lint Lizard to the vacuum is easy enough because it’s made to attach to most commercial vacuum cleaners. However, there’s a serious design flaw in the actual product. Lint Lizard basically boils down to being a 12 inch thick curved plastic tube. The problem with it is that its curved nature makes it hard to get where it needs to. The end result is that it ends up picking up lint due to it clinging to the outside of the hose, but nothing really goes up the hose.

The proof of a product is in how well it does what it says, and unfortunately the Lint Lizard flops in real world tests. What they need to do is not use such a curved and rigid plastic for the tube, that way you could direct it more easily and get to more lint and other debris. But since it is so hard to move around and bend it the way you want, it isn’t good at doing the very job it sets out to do. Also, it’s a little pricey for what it is, just a few plastic pieces. Other Lint Lizard reviews say it works, but we just can’t replicate their success in our testing. 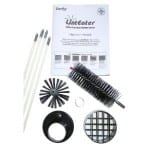 We’re not recommending the Lint Lizard and went to work to find you something that is well-reviewed and can actually do the job you need it to. We are recommending you pick up a LintEater Dryer Vent Cleaning System. It has awesome reviews from actual users, and is a whole lot cheaper than the Lint Lizard.

The LintEater is exactly how a product like this should work, and is well thought out. You’ll get a thorough job done, with less cost and this is something that can actually get all up in the ventilation tubes. These often coil around a few times, which is what causes the problem in the first place.

What do you think? Does Lint Lizard work or not?

← Previous Does Smoke Deter Really Work?
⚅ back to blog
Next →Does the Loreem Skin Care System Really Work?

8 Customer Reviews on “Does the Lint Lizard Really Work?”