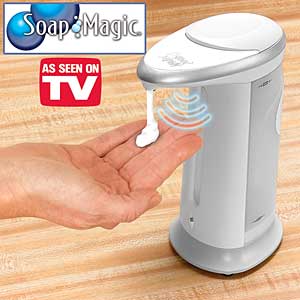 Now your home can have soap dispensers like fancy airports with Soap Magic. The commercial shows all sorts of great uses for an automatic dispenser, including dish soap, hand sanitizers, and hand soaps. But does it really work the way it looks on TV, or are you going to receive it and be totally disappointed?

Overview
All of American seems to gradually be turning into germaphobes, and that’s exactly the type of market that is targeted by Soap Magic. Sure, there are some other demographics that would benefit from this, like those with severe arthritis that have trouble handling and pumping a hand lotion bottle, or new moms that have trouble changing a diaper and keeping creams at the ready.

But mostly it’s those that were concerned about cross contaminating salmonella when cutting chicken, or that want their entire family to use hand sanitizer when they come in the door. That’s borderline germ conscious, and leaning towards a phobia.

What they should really focus on is how fancy and nice it is to just stick your hand in front of a dispenser and have it work. How great is it to go into a fully automated public rest room and you don’t have to touch a thing? The toilet flushes automatically, the water turns off and on with motion detectors, and the soap and towels do the same. It’s a great feeling knowing you esaped with minimal contact.

The need for these precautions is lessened when at home, but it still gives a nice feel to be able to wash your hands and not have to touch a hand soap dispenser or fumble with a bar of soap.

The Claim
The claim is really that they’ve managed to produce a product that can detect motion, squeeze out the liquid, and even give a nice little chime when it’s done so you know when you can remove your hand, all for a modest price.

That’s quite the feat, but the makers of Soap Magic don’t really trip over themselves to say that they’re saving your life with this product, the way most manufacturers so. Quite refreshing.

The Hype
The hype really comes in the form of adding the word “magic” to a product. Especially in this case, there is nothing magical about the soap, in fact you have to supply your own. Additionally, you might not even be using it for soap, if you plan on filling it with moisturizer or sanitizer. Also, it’s the 21st century, we’ve seen auto dispensers before so there’s not really an awe factor here.

One cool thing is that it comes with the batteries needed, so this is not an additional charge and keeps the costs at what they are with no extra things needed to buy in order to start using it right out of the box.

Evaluation
Soap Magic works as indicated, and only has a few different settings. You can turn it off and on, and you can also turn the chime off and on. Other that potentially making the batteries last longer it is not advised to operate this without the chime on. The unit shoots out a generous amount of liquid so you might pull your hand away when you think it should be finished.

Plus when you’re talking about viscous things like soaps and lotions, once the initial bit hits your fingers it starts to ooze onto itself, so it’s hard to determine when it has stopped, based on feeling alone. Unless you want to remember to look at it do its job every time, you’ll want the audio signal so it can remain hassle free.

Yep, it works just like it shows, and dispenses whatever you want out of it.

Our Recommendation
It’s not recommended for really expensive hand lotions, or ones that you only need a dab with. It’d be better to use a full body moisturizer in this case, something that comes in a large tub and that you can rub into other area besides your hands.

Other than that this is a great product to pick up and it will give your home that futuristic or more elegant feel that a normal bottle of soap does.

What do you think? Does Soap Magic really work?