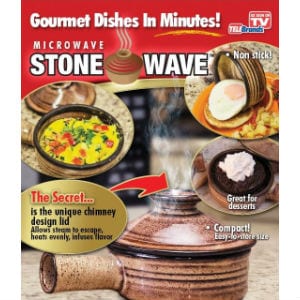 The Stone Wave says it gives you the ability to bake using your microwave. Microwaves can do a lot of things, but baking usually isn’t one that’s listed on things they do well, so let’s see if this simple pot pulls it off and really gives you baking capabilities.

Overview
It’s kind of far-fetched that you’d be able to construct anything of gourmet quality from your microwave. It’s a bit of a stretch to think that you can use a device that is mainly geared toward reheating foods and microwaving popcorn to make foods that would rival a five star restaurant. At best a microwave has been used with some products to cook bacon well, or to make eggs fast eand easy. So at first we were skeptical that a product like this could actually live up to expectations. We wanted to know more.

The Claim
The Stone Wave is made out of a special ceramic and designed so that it spreads the heat around and cooks the food all the way through, rather than having the problem of only cooking the outside and not getting the inside cooked nearly as much. They credit the success of the design to the steam chimney that is built into the lid. This lets out enough steam so that the lid doesn’t explode off, and keeps enough inside so that it all cooks just right.

They also say that while the pot itself will get hot enough to cook and bake foods, the handle will stay cool enough to touch.

The Hype
The infomercial attached to this is intended to hype potential buyers up to the point of making a purchase. It shows several different foods that you can make with this, and of course shows actors enjoying the food as if it were the most delicious thing they’d ever eaten in their entire lives. So obviously there are some theatrics, and you might not enjoy it quite as much, but you may very well enjoy the foods that you make with this.

The Cost
The Stone Wave is listed at $10 plus shipping and handling, but you get two of them and pay on shipping for both so your total comes to $24. If you take them up on their 30 day guarantee you’d only get back the $10 and be out $14 plus return shipping costs. The ordering process has been criticized due to the high number of upsells. An upsell is when a company will get you to commit to buying a lower priced item in the hopes that you’ll add to your order while you’re still in the buying mood and increase your overall total.

The Commitment
You likely wouldn’t have to change much about the way you cook your food in order to use this, and in theory it could help you cook certain dishes faster. It comes with a 5 minute recipe guide which most people would find reduces the amount of time it takes to cook a small meal from start to finish.

Evaluation
The Stone Wave says you can make things like omelets, apple cinnamon bake, French onion soup, and even chocolate souffle with their product. If you’re lost for ideas on how to use this, or want to make sure that everything turns out the way it’s shown to in the video ad, you simply follow the directions. The nice thing about the infomercial is that the foods look like they really were cooked in the microwave, for example the eggs they show have that telltale sign of eggs cooked in the microwave. It’s likely they didn’t just swap the food out for food that was cooked the conventional way.

The handle itself almost makes this worth ordering because if you’re like us you’ve probably burned your fingers one too many times on an ultra-hot plate or bowl from the microwave. Having something to be able to hold onto and handle the pot is a great idea and is sure to win over fans.

A testimonial is not the same as a review, and if you’re trying to get unbiased information on how well this works you might be presented with people saying it works great, but upon further inspection these come from the company itself on various websites all leading back to the sales page. But if you look hard enough you can

The Stone Wave is getting our Try rating due to the fact that there are few third party reviews available, the pricing structure is not consumer friendly, and the ordering process has been described as nothing short of aggravating. If you can get past all of that, the product itself seems to be an OK purchase, with the majority of buyers saying they don’t regret getting it. It’s really up to you whether that’s enough assurance to go ahead with the purchase.

Our Recommendation
As long as you stick to the 2 pack for $24 it’s not a bad deal getting these for $12 each, and from all accounts it seems that you won’t have to worry about sending them back. It really doesn’t make a whole lot of sense to send them back even if you don’t like them because you’ll only get back $10 and you might spend half that much just to ship them back. So overall you’re shouldering most of the risk, but it seems that it’s a calculated risk and worth going for.

What do you think? Does the Stone Wave work or not?

← Previous Does Dinovite Really Work?
⚅ back to blog
Next →Does Great Kitchen Secrets Really Work?

14 Customer Reviews on “Does the Stone Wave Really Work?”