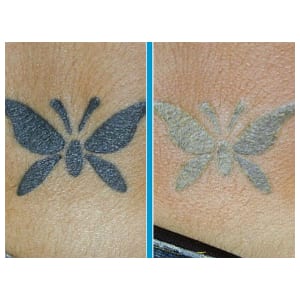 If you’re regretting the tattoo you got in your younger years you might think that tattoo removal cream is a cheap alternative to laser removal. It would be nice to think that you could get rid of something that was meant to be permanent for just a few dollars and as easily as rubbing cream on it. Many of the creams out there also include a buffer of some sort, so the idea is that you sand off the tattoo and use the cream to break up the ink and soothe the skin. But does it actually work?

Overview
When compared to getting your tattoos removed by laser, a cream sounds like a much better way to go, at least on the surface. But the reviews from people that have used this form of tattoo removal have been mixed to say the least. Some people say they don’t work at all, others say that it takes so long it’s not worth it, and still others say they were able to remove their tattoo quite easily with it. It all depends on what product you go with, and how diligent you are at keeping up with the removal regimen.

The Claim
Depending on which tattoo removal cream you go with you will be promised to be able to get rid of your tattoo in a matter of weeks or months, according to what sort of system they are using and how aggressive it is at getting rid of the tattoo. Some of these creams are harsher than others, and therefore say that they can work more quickly. The trade-off is that the faster you want to get the results, the more painful it might be, and the more irritated your skin might get.

The Hype
Since professional tattoo removal is so expensive, there is a ready market of regretful tattoo owners that are looking for a way to erase the past without having to shell out thousands of dollars, and go through more pain to have it removed. Even celebrities have a tough time getting rid of tattoos. Just look at Johnny Depp, who had a tattoo that read “Winona Forever”. After he broke up with Winona Ryder he only sprung for them to take off the ‘n’ and ‘a’ so it now reads “Wino Forever”.

The Cost
Depending on which tattoo removal cream you go with you can expect to pay anywhere from $10 to $100 or more, depending on how comprehensive the system is, and what they can convince you to pay on their pitch page. When compared to the cost of laser removal or other professional removal methods, these costs seem rather nominal, and are why most people will try this route before escalating things to more expensive solutions. Compared to the initial cost of getting the tattoo you might find it ironic that it costs so much more to take it off.

The Commitment
The commitment level here is higher compared to going with something like laser removal because you have to keep up with your treatments until your tattoo fades to a level that is acceptable to you. When you go to a clinic and have your tattoo removed by a professional, a lot of the responsibility rests on their shoulders instead of yours. When you use a cream you’re going to have to apply it daily for an extended period of time, and a lot of people forget a treatment here and there, which only delays the results since it is a cumulative process.

Evaluation
A tattoo removal cream might be a viable option for you if you have a very colorful tattoo, that is rather small in size, and if you are diligent enough to remember to use it every day. You also have to find a well reviewed cream so that you get the most bang for your buck, and don’t waste any time on something that isn’t going to work even if you do use everyday. You also have to weigh this up against saving up and getting it professionally removed, and saving yourself the hassle of waiting for the slow and steady results of a cream.

Tattoo removal cream is a fallback if you either can’t afford or don’t want to go through with other ways of removing your tattoo. The best way to get rid of a tattoo is to have it removed with laser treatments. But even these require going back again and again so that it can gradually be worked on. There’s not really an easy way out of your tattoo, and if you remember back, this was part of the reason why you got in the first place. They wouldn’t be quite as cool if they could just be taken off willy-nilly, or they would be considered temporary tattoos.

Our Recommendation
Since you don’t have a time machine and can’t go back and tell your younger self not to get that tattoo of Chester the Cheetah, you are now tasked with the responsibility of finding an effective way of removing, or at least fading down your tattoo. There are only so many different options available to you, and each of them has their own pros and cons associated with it, so it is just a matter of choosing a method that fits your budget, and falls within your parameters of how much you want to be involved with the process.

What do you think? Does Tattoo Removal Cream work or not?

← Previous Does Satellite Direct Really Work?
⚅ back to blog
Next →Does Registry Easy Really Work?