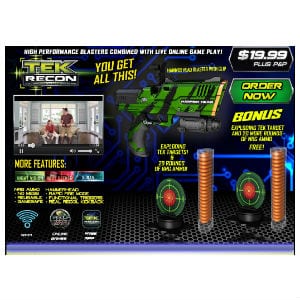 Tek Recon is like Nerf taken to the Nth degree. It combines actual guns and blends in first person shooters like Halo in a unique mix of the virtual and the real. But once you get everything set up, is it actually as fun as it looks like it could be?

Overview
If they pull this off they’ll be putting laser tag places out of business. This would have all of the fun at a fraction of the expense, and would be able to be played again and again in different scenarios and with different groups of friends. This would also cut down on the number of paintball players, since you’d be able to recreate the same sort of fun without having to invest so much in paintball gear, or suffer the welts afterward.

The Claim
The makers of Tek Recon say that their reusable rounds can be shot anywhere from 50 to 70 feet. They also say that you can shoot in rapid fire succession to overwhelm your opponents. with the smartphone being used as your scope you should have better accuracy with these. They say that the rounds being used won’t hurt you, or damage any surfaces, so you can fire away with worrying about hurting anyone or anything, but they do recommend using protective eyewear.

The real strength to this, and what makes it a killer app, is that they’re using your smartphone and all of its capabilities to make the games more like video and online gaming. They say it attaches securely to the blaster, and once it’s synced up it will help you aim, keep you in touch with your team, and show you where everyone is on a game map. They also say it will give you different vision capabilities, like x-ray and thermal vision, and that it will accentuate your games by playing sounds when you pull your trigger.

The Hype
This is one of the most hyped products out there because it was being shown off even during its prototype phase. People that see it are definitely impressed with the proposed features and it’s easy to see how fun it would be to play if everything worked as shown.

The Cost
Tek Recon is being pitched at a price tag of $20 plus $10 shipping. They double your ammo amount, giving you fifty cartridges instead of 25 and an extra target, and it doesn’t state anywhere that they’re charging you double shipping for that. You are only getting one gun with this, and you have to supply your own smartphone for it to work. This is a great price, considering that plain old Nerf guns can cost as much and don’t have nearly as many features.

The Commitment
It’s going to be up to you to supply your own protective eyewear, as well as smartphone that is compatible with the app, either an Android or iPhone. You’ll need to install the app on your phone and familiarize yourself with all of the features if you want to have an exciting time playing. This should be done by each team member before play so that you’re not left figuring things out while in the middle of a game.

Evaluation
Tek Recon is a very elaborate concept, and it’s going to take a good mix of technology and real world products to bring this to fruition. It may take a bit of tinkering on your part to get everything to work right, and setting up a game with your friends might be trickier than you think thanks to everyone’s busy schedules, but overall it should provide a nice blend of video gaming and real world shooting.

Incorporating smartphones into this was a brilliant idea, because it captures the essence of a video game, right down to the sound effects. By looking through your phone and seeing your friends as targets instead of video game characters, it’s a lot of fun. Tracking them with GPS and using WiFi to communicate really helps you get immersed in the game and make you feel like it’s real. But adding sound effects to your trigger, and keeping an ammo count is where things really get interesting, because the blaster is able to digitize information in real time so you don’t have to keep track of that stuff on your own.

They have multiplayer games built right into this, so as soon as everyone has the app downloaded you’ll be able to pick which game you want to play, and then decide on who’s on which team. They have classics like Capture the Flag, and they’re using QR codes on the flags so everyone is instantly updated on the status of which team is in the lead and which team has won. That cuts down on instances of cheating, and keeps everything fair and in real time.

All signs point to Tek Recon being a success. They spend a long time developing it, and went through several prototypes. Their current offer is for the Hammerhead, and they’ll later release the Havok, a bigger, meaner version that will most definitely shoot further and carry more ammo, and come at a higher price. But if you’re going to be serious about this, you and your friends are going to need multiple blasters, and you’ll have to figure out if you want to keep it fair by everyone having the same gun, or if you want to switch up the guns with each game you play.

Our Recommendation
If you like to play first person shooter games, especially the ones that are linked up with your friends, and have always wondered if your skills translate to real world shoot em ups, this is your chance. The price is not bad for these guns, and for about the price of a video game you can transfer your game play to reality and see how you fare. This is going to be more fun because it will involve more of your sense, but still give you that video game feeling because you’re using your smartphone.

What do you think? Does Tek Recon work or not?

← Previous Does the Michel Mercier Ultimate Detangling Brush Really Work?
⚅ back to blog
Next →Does the Pattern Painter Really Work?