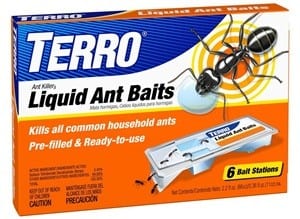 As soon as the warm weather hits it seems as though nature comes alive. So does its critters like the ants, which seem to prefer invading your indoor space. So will Terro Liquid Ant Bait come to the rescue?

As you have guessed by the name, Terro Liquid Ant Bait is a product used to get rid of the ants. While these insects are not of much concern when they remain outdoors, they can become a real problem when inside. Also some ants can be very destructive, like carpenter ants, for example. Terro is a collection of 6 ant bait stations designed to draw the ants to them. Here the ants feast on the food that is going to eventually destroy them, but not instantly. The ants consuming the poison in the ant trap will take it back to their colony where the real damage is done.

The company claims that Terro Liquid Ant Bait will kill the worker ants within two to three days.They state that the traps are designed so they won’t dry out, so the poisonous food is readily available for the ants day or night. They claim the product is effective for all types of household ants.

The fact that you don’t have to mess around mixing poisonous formulas is one area the hype focuses on. Then you don’t have to worry about spreading messy liquids or powders around, or have to worry about other animals or kids getting into these types of substances. Although you do have to keep the Terro Liquid Ant Bait away from them too. It is easy to use and effective and that’s exactly what those who are fighting an ant problem want.

If you purchase the Terro Liquid Ant Bait at Amazon you can expect to pay $5.67. This purchase is comprised of 6 separate pre-filled ant traps.

The Terro Liquid Ant Bait works either outside or inside. You want to put it as close to the area where you are seeing the ants, but out of the reach of animals and children. Also the next commitment you are going to have to make is to be patient. While you may want to see the ants shrivel up and die right in front of you, so you know the product is working, this isn’t going to happen. This is a slow acting product with a purpose.

While some people may not like the fact they have to put up with the ant problem for a few days while the product does its work, it makes sense. There is no point in just getting rid of the ones that you see, because there are a whole lot more from where they came from. You want the ants visiting the trap to pick up the food, and take it back to wipe out the whole colony. Not only that, the ants carrying the food back are going to send out messages to other ants along the way as to where they can find this food as well. So, you can expect to see a lot more ants marching up to the Terro Liquid Ant Baits, much to your horror at the moment. Stick with it though, and it shouldn’t be long before your see the bait traps are vacant, as the ants are no more.  If you want to learn more about ants, Terro has a informative fact page on their website.

We are going to give this product a thumbs up. This is most based on the fact that it has become a number one best seller on Amazon, which is no easy task. Secondly it has received a 4.5 star rating out of 2,355 reviews. That’s pretty impressive when you consider there are so many similar products on the market today.

Nobody likes to kill nature’s critters or insects, even the ants. At the same time you cannot allow them to invade your home and property either. They are not the only problem that can occur. There are a lot of people who have problems with moles. These guys can make your lawn look disastrous with their hole digging. One product that has been introduced without having to bring an end to these varmint’s lives is the Riddex Sonic Mole Repeller. So if you are having this type of animal problem then check it out.

What do you think? Does Terro Liquid Ant Bait work or not?

← Previous Does Grass Shot Really Work?
⚅ back to blog
Next →Does Balloon Bonanza Really Work?