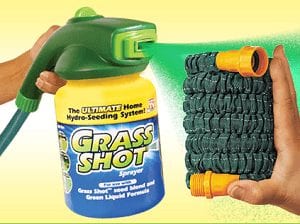 Believe it or not it will soon be time for the first grass cutting. It also means time to repair those lawns. Does this mean that you will want to invest in Grass Shot for this? Let’s find out.

Overview
This product is basically a liquid grass seed.It is a form of hydro seeding, which merely means you can seed a large area in a short period of time. The Grass Shot container gets attached to your garden hose. Then you direct it at the area that you will want to treat. It will appear as a foam. That brown spot you are treating will turn to green, but its not instant grass. It is a dye that is meant to show you what has been treated with the product. The product is actually a mix of water, seed and fertilizer all in one. It isn’t some new discovery either as it has been around in other forms since the 1950’s.

The Claim
The company claims that once you spray the seed on, it sticks. So this must mean that its not going to blow away with the wind. They are claiming that its just as easy as watering your lawn. They indicate that it works well on most spotted areas. They say that the amount of product that you receive with your order is enough to cover 200 square feet.

The Hype
The fact that you don’t have to second guess where you have put the seed is one bonus, which is often a problem with traditional seeding. Then you don’t have to worry about mixing extra soil and fertilizer is another problem solved. When they indicate that the brown spot disappears though, remember this isn’t grass growth its more like green staining, so its not as noticeable.

The Commitment
There doesn’t sound like there is going to be much of a learning curve to use the Grass Shot on your part. So it is just going to be a matter of making sure your hose is hooked up and then going for it.

Evaluation
To properly evaluate a product that has just hit the market like this we need to look at the theory behind it. It is hydro seeding, so lets look at this for a moment. Hydro seeding is often used in a commercial application which implements large equipment to cover large areas. There are similar home use versions available on the market. One is called Hydro Mousse Liquid Lawn. It sells for $27.99. On Amazon it is classed as a best seller, but when you look at the reviews its not so great.Out of 97 reviews it has only received a 2.9. rating. While we are talking about a totally different brand, it is still enough to raise some red flags. However, the technology behind hydro seeding is sound.

We’re going to give the Grass Shot a risky try/buy rating. There is nothing in the advertising that seems to address the common complaints that are surrounding the competitive product Hydro Mousse. The other problem is, you don’t know what kind of grass seed you are getting so it could be totally different, than what you have now. It is pretty difficult to return a product such as this if you aren’t satisfied because the results depend on a lot of factors according to your growing environment. As far as the pocket hose goes which is included for an extra $9.99 the reviews for and against this (not the ultra) is pretty much even.

Our Recommendation
It’s not fair to raise a problem like the brown grass spots then not give you a solid solution or at least some suggestions. In the past we did do a review on a product called Quick Lawn, which also was a, as seen on TV product. It has received many more thumbs up than down. Another possible solution is the Cutting Edge Grass seed that we talked about which is also getting good feed back.

What do you think? Does Grass Shot work or not?