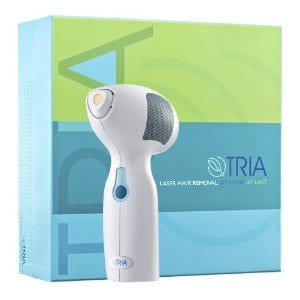 The TRIA Laser Hair Removal gun is designed to bring salon-caliber hair removal to your home. The thought is nice, not having to spend a small fortune on treatment after treatment, and being able to use it whenever you want after making a one-off purchase.

But all of the promises are just that, and they don’t mean a thing if the product doesn’t work. So let’s see what the verdict is on this hair removing wonder.

Overview
Hair removal is near the top of many people’s list, just as soon as there is a reliable method for getting rid of it. Because of the personal nature of this desire, many people don’t like the thought of announcing to the world that they have hair in places they don’t want it. That’s why the winner in this industry will definitely create something that can be used in the home. But is TRIA that company?

The Claim
They say that you’ll be able to get rid of your unwanted hair, without having to visit a clinic to get professional treatments. They also say their results are guaranteed, and after using the product for a long time, you won’t have to use it any more, because your hair will be permanently removed.

Here is what they say at their official site:

The Hype
The hype comes from the fact that even professional laser hair removal treatments are met with a lot of skepticism from people that say it doesn’t work. And they spend thousands of dollars on multiple treatments over the course of several weeks and months. This is a product that promises to remove your hair from home, rather than having to go into these clinics, but if the clinics can’t get it right much of the time, how can an at-home laser system?

The Cost
The cost is where many people say goodbye to the Tria Laser Hair Removal system. At $395 you’ve got to really want to get rid of your hair, and you’ve got to have a lot of trust that this product is going to work for you in the long run.

The Commitment
You have to commit to using the TRIA Laser Hair Removal gun as directed for a minimum of 90 days so you can start seeing results and get hooked on it. They say that after 6-8 months you won’t have to use it any more, so when you weigh the commitment of using the TRIA system over conventional methods of removing your hair, it actually has a lower total commitment level to it.

The Verdict From Users
There has never been more of a mixed review than the reports for the Tria Laser Hair Removal tool. 27% of people give it 5 stars, saying that it works and they’re seeing results. At the same time, 34% of people give it 1 star and say it doesn’t work and is a total waste of money. What’s even more interesting is that an additional 19 people rate it favorably, saying that it might not be perfect, but it still gets the job done and produces results. However an additional 5% of people rate it unfavorably, saying that while it may produce some results, it doesn’t come close to doing what it claims to.

Add that up we see that 46% rate this favorably, and say it works close to how they expected or hoped, while 39% say that it doesn’t perform at an acceptable level. While this does tip the scale into the favor of TRIA, it definitely leaves much to be desired as far as user feedback goes.

So how can you make a big purchasing decision like this, when there is a virtual tug of war going on between those that have tried it? The answer is that no hair removal product is going to get glowing reviews from everyone, especially not at this price point. There is a phenomenon known as cognitive dissonance, which increases as the price of a purchase goes up, leading to buyer’s remorse. It is likely that some of these users put so much hope and expectation into the product that it could never have lived up to what they thought it would do.

We’ve got to give this the Thumb Sideways. There’s just not enough reliable data to make a determination that it will work for most people that try it. Our hunch is that it probably won’t work for most people, not because it doesn’t work as a product, but that it’s hard to stick to a regimen for 90 days and beyond, and also because there are a nearly limitless amount of skin and hair types, both of which factor into the effectiveness.

Our Recommendation
If you have the money, you should try the TRIA Laser Hair Removal system, but don’t bet the farm on it, and give it the time it needs before determining if it’s doing anything. If removing that pesky hair is not a big deal for you, don’t bother going with this.

What do you think? Does Tria Laser Hair Removal work or not?