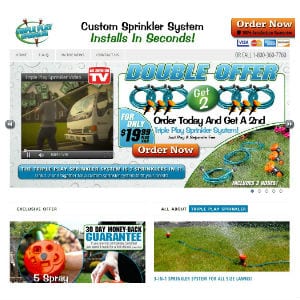 The Triple Play Sprinkler is a 6 headed sprinkler system that they say can solve your watering needs and may even help you avoid getting a professional system installed. But can this sprinkler, marketed as a $20 solution, really do all that it says?

Overview
Watering your lawn and plants around your lawn can be very tiring, especially during the months where you pretty much have to do it every day. Your lawn may turn brown and your plants may wither and die if you don’t keep up with the watering duties, but wouldn’t it be nice if you could just turn the water on and it would all be watered at once?

The Hype
The hype is brought on by the thought that this could replace a professionally installed sprinkler system. There’s simply no way that this could work as well as something that is custom designed and installed and set up on a timer so that you don’t have to do anything. Judging by the video evidence there’s just no way that this produces the kind of results that would replicate a pro job.

The Cost
They list the cost of the Triple Play Sprinkler at $20 plus $8 shipping. They also say that there’s a buy one get another one free, just pay shipping offer which would bring your order to $36, but it is unclear whether this happens automatically, or whether you are presented it as an option. At the time of checkout they show your order total as $27.90 but there are further choices to be made after you enter in your credit card information.

The Commitment
They say that this is easy to move and adjust, so you can put it where you need it, let it do its thing, and then move it when you need it somewhere else. This is more involvement from you than an installed sprinkler system, and perhaps even with a regular sprinkler that you’d only need to move once, if at all.

Evaluation
It’s not very often that a promo video for a product shows its ineffectiveness, but that’s what we’re seeing here. An advertisement is supposed to show a product in its best light, and what is shown is a sprinkler that waters a 2 foot radius around itself. Even with all six sprinklers going at the same time they were only able to cover half a hard. Who wants to have to go readjust 6 different sprinkler heads just to water their front lawn?

Because this splits up the water into anywhere from 3 to 6 different directions you are reducing the amount of water pressure that goes to each sprinkler, and what you end up with is a fraction of the distance that you’d get with a regular sprinkler that is just using one input and one nozzle. Consider this sprinkler as an alternative: the Gilmour sprinkler can hit an area of 5800 square feet.

Overall the Triple Play Sprinkler system is underwhelming and we’re giving it the Thumbs Down and saying it doesn’t work. While it seems like a good idea to not have to get a professional sprinkler system installed, there’s no way this provides the same sort of results. And we can’t see how this would be any easier or better than using a tried and tested oscillating sprinkler that has been around for several decades.’

That being said, if you just wanted to use these to water a garden each day without having to do too much, or using them in a smaller capacity, they should work. The larger the area, and the more areas you want to water, the less effective they would be, and the higher the chance that you wouldn’t be happy with them.

Our Recommendation
Save your money on this and apply it towards a sprinkler that gets good reviews and can actually water your entire lawn from one central location. If this system were able to water a larger part of the lawn without needing to be moved, it might be worth it, but there is no reason to believe that it can do this because they couldn’t even show it doing this under optimal conditions.

What do you think? Does Triple Play Sprinkler work or not?

← Previous Does Screen Magic Really Work?
⚅ back to blog
Next →Does Octaslider Really Work?

2 Customer Reviews on “Does the Triple Play Sprinkler Really Work?”