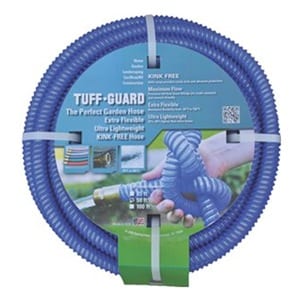 The Tuff-Guard Hose looks like it might be one of the better garden hoses you can buy. They show it all twisted up and tangled yet it still is able to have water come out of it. If you compare that to an ordinary hose it would get all kinked up and either cut off the water supply completely or reduce it to a trickle. So does it really work as depicted?

Overview
Having a trusty garden hose is paramount if you spend any sort of time in the yard. It’s one of the more frequently used items, and is the source of a lot of frustration if you have one of the big bulky hoses that tangles up easily. It’s no wonder that several companies out there are trying to make the perfect garden hose, because there are a lot of flaws present in conventional hoses. A few of those problems are addressed by this model, including tangles, kinks, and weight.

The Claim
The makers of the Tuff-Guard hose say that it is very flexible, so you don’t have to worry about going around the corners of your house, or about making sharp turns with it or rotating it around. They also say that it’s kink-proof, meaning no matter how much you twist it and turn it you won’t notice any problem with the flow of water coming through. They also say that it doesn’t weigh as much as ordinary hoses, so you won’t strain as much to pull it around the yard, and to make it go where you want it to.

The Hype
Garden hoses have gotten a lot of attention from manufacturers these days. They must have realized that there was an opportunity to make improvements on a regular hose, and have put a lot of research and development into solving these problems. They’re coming out with all new materials, and this hose even has a double helix design. It seems like they’re putting a lot of science and technology into what once was a rather simple item. The benefit to us consumers is that we’re getting a better hose selection at pretty much the same price as a conventional hose.

The Cost
You can pick up a Tuff-Guard hose for around $50, and that’s for the 50 foot size. You can double the length to 100 feet for around $90. It all depends on how big your yard is, or how much area you want to be able to cover with it. Since it’s a lighter weight you might be able to get by with a smaller length and just detach it and reattach it closer to where you’ll be working. Or you might find it more convenient to get the longer size and pull it all around.

The Commitment
Compared to the bulky hassle of an regular hose this should represent a reduction in the amount of straining and tugging you have to do. And it should also cause less frustration from having to unkink the hose, or having to double back and untangle the hose when you don’t get the water pressure you need. Overall it should make your outdoor chores easier, whether it be watering the lawn and plants, washing the car or dog, or hosing off lawn and garden equipment.

Evaluation
The Tuff-Guard hose stands up to real world evaluations and gets good reviews. Most people say that it delivers on its promises, doesn’t tangle, and is lighter than their previous hose. They’ve even been praised for their customer service, happily backing up any defective units with fully functional replacements. Some people have complained that they received a hose that didn’t work very well, but it seems that they didn’t follow up on the problem and get it replaced. But most users received a quality hose the first time and are happy that they paid a little extra for it.

One cool thing about this hose is that it stays flexible even in extreme temperatures. So no matter the season you can be sure that your hose won’t freeze up or get too soft in the heat to work properly. A typical hose will get super hard and rigid during the winter months, almost becoming unusable. And in the summer it can get so hot that it becomes too flimsy and the water pressure can suffer.

We’re giving the Tuff-Guard hose our Solid Try rating. It’s got a good design, and it solves a lot of the complaints that many have with using a traditional garden hose. It doesn’t use any gimmicks and seems to back up all of its claims. Since it’s almost half the weight of other hoses you’ll notice an immediate improvement in how easy it is to use for various chores.

Our Recommendation
You probably only think about your garden hose when it’s giving you a hard time in the yard. It’s not really something you would consider investing in since it’s not at the top of your action item list. But having a good garden hose is the cornerstone to enjoying your time spent outdoors attending to all that needs to get done out there. You’ll be surprised at what a difference a simple hose can make to your quality of life, so we’re recommending getting this hose, or something similar so that’s one less thing you have to think about.

What do you think? Does a Tuff-Guard Hose work or not?

7 Customer Reviews on “Does a Tuff-Guard Hose Really Work?”