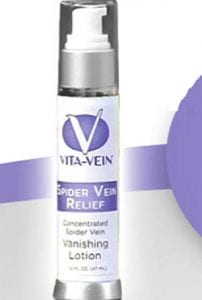 A lot of women and men too really have a problem with spider veins, and haven’t been able to find much to help with these. Let’s see if Vita Vein can help with this.

Overview
Spider veins are those small red, blue and sometimes purple blood vessels that can be seen just under the skin’s surface. They are not as large or prominent as varicose veins, but those that have them are often embarrassed by them. They are commonly found on the legs or the face. Vita Vein is a product that is supposed to reduce the look of these spider veins.

The Claim
Vita Vein promoters are claiming their product is a spider vein relief vanishing lotion. They are claiming that when you apply this product you will see a visible difference. They claim they are using professional grade ingredients in their product. Several of these are natural ingredients such as grape seed, olive oil,marine extracts and vitamin E, along with some other ingredients.

The Hype
The company is concentrating on the Vita Vein not being a messy cover up. There are several products on the market that actually camouflage the spider veins, but many of them are noted for being heavy and greasy, and the product itself is quite noticeable even if the spider veins no longer are. Vita Vein is indicating that none of these negative aspects are present in their product.

The Commitment
The promo material doesn’t say how often or how long it will take specifically to see results. Every person is different so likely it will depend on the intensity of your spider veins. You no doubt will have to use the product as directed and for a period of time. There is also no indication as to whether you will eventually be able to stop using the product.

Evaluation
The best and first approach would be to try and determine if there is anything that you may be doing that is contributing to having these spider veins. In some cases they can be hereditary. In other cases they can be caused by the occupation of the person. Especially for individuals who are standing a great deal of time. There are a lot of other potential causes, and ruling these out will be your first step in the right direction. Doing so may not get rid of the spider veins that are already present, but it might stop them from getting worse, or new ones from occurring.

Before we could determine whether Vita Vein may be able to work, we wanted to look at similar products. We took a look at Vita K Solutions which has a long list of complex ingredients. We wanted to see if anything applied topically to the skin could actually work. Out of 69 reviews that product got a 3.1 star rating. In general most of the reviews focused on that although there was some improvement,continuous use of the product was needed. Based on this we decided to give the Vita Vein a Try/Buy rating. We like some of the natural ingredients that it contained,some of which are known to be beneficial to the overall appearance of the skin.

Our Recommendation
If you are going to try the Vita Vein product then be sure to commit to using it as directed. Also, be realistic with your expectations. Your spider veins are not going to disappear, but hopefully be less noticeable. We have looked at another skin related problem like stretch marks in the past. We did a review of a few different products that were meant to help the appearance of these. One of these was the Palmers Stretch Mark Cream. It got some good feed back. We were interested in seeing if topical applications could truly affect the appearance of flaws in the skin similar to spider veins. While similar there is a lot of differences between the two conditions. The Palmers cream also contained Vitamin E, which has gained some good recognition for its benefits to the skin.

What do you think? Does Vita Vein work or not?

← Previous Does Plumber’s Hero Really Work?
⚅ back to blog
Next →Does Lunar Pages Really Work?