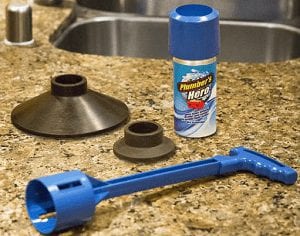 Nothing is more frustrating or potentially expensive to correct than a plugged drain. There may be a quick fix now for this problem called Plumber’s Hero, so let’s find out if its the average homeowner’s hero.

Overview
Plumber’s Hero is a hand held device that you are supposed to be able to just press down over the clogged drain, and it will instantly become open once again. It comes with a special container that contains the product responsible for unplugging the drain. It is being promoted as being able to be used up to 20 times, and that this product will last up to 10 years.

The Claim
The promoters are saying that Plumber’s Hero comes with some special attachments so it will create the perfect seal on all types of drains. They promote its use for toilets, sinks, bath tubs and even garbage disposal units. They are also saying it leaves a nice odor to the drain after it has been unclogged.

The Hype
The focus is being put on the ease of use, but most importantly how it can replace the need for a costly plumber. Anyone that has had to deal with a clogged drain just dreads the thought of having to call in this type of professional.

The Cost
You can expect to pay $19.99 for the kit plus $7.99 shipping and handling. The kit is comprised of one Plumber’s Hero Can, one large and one small rubber attachment, and the toilet extension handle.

The Commitment
Most likely once you have ordered this and it arrives you are going to tuck it away in a safe place ready for use. As soon as that first drain clog arrives you will be rushing to get the Plumber’s Hero out and into action. Be sure to read the instructions properly so you don’t waste the product in the can.

Evaluation
When most people are first faced with a clogged drain they have a couple of options that they resort to. They go for the plunger which is an attempt at using pressure to release the clog. If this fails then they turn to drain cleaning products. Both of these attempts are done with intense hope that they will work. When you look at the Plumber’s Hero this is actually a combination of both product and pressure at the same time, and this may prove to be quite effective. It would appear that the Plumber’s Hero product is being driven into the drain with the pressure action.

Plumber’s Hero has been around for a while but seems to be getting a big push by its promoters. We’re going to give the product a Try/Buy as it has has also been featured on HSN, and has been reviewed by 8 people giving it a 3 star rating. Some of the complaints focused around the canister losing its pressure. The biggest complaint of those who did not like the product was that they waited until too late to send it back. Probably they ordered it to use when needed, which ended up being beyond the purchase return point, which most people would find themselves in the same situation. It is not too likely that if you have a plugged drain that you are going to wait for this product to arrive.

Our Recommendation
If you are dealing with a clogged drain let’s face it you have got to do something about it. The positive reviews on the Plumber’s Hero were quite good, so probably it comes down to just how clogged the drain is, and what’s in there. There is another option and that is to snake the drain, but this is not the most pleasant method. If its of interest then you may want to take a look at our Turbo snake review which has gotten some thumbs up for its performance.

What do you think? Does Plumber’s Hero work or not?

← Previous Does The Coconut Oil Secret Really Work?
⚅ back to blog
Next →Does Vita Vein Really Work?