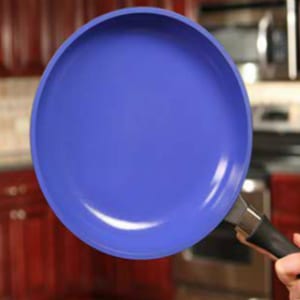 If you’ve been wondering if the Yoshi Blue Pan should be your next frying pan, wonder no more. We’ve put it to the test and sized it up against some of the best-selling and most heavily promoted frying pans on the market. The non-stick battle is a fierce one, and companies are always trying to outdo one another. The Yoshi Blue skillet is raising the game to a new level by adding diamonds and nano-ceramics to the mix, so let’s see if it’s all that it says it is.

Overview
Not to be confused with the dinosaur that Mario befriends in Super Mario World, this pan likely originates from Japan and is making its American debut. It’s a pretty common occurrence that a product will become popular overseas and then American companies will license it for sale in the States. It’s a way for them to take less of a risk when they know the product has already by tested and gone over well with a lot of people.

The Claim
They say that this pan is extremely non-stick so you don’t have to use any oils and fats in order to cook with it. Yoshi Blue Pan says that it has actual diamonds in it, and that it uses nano-ceramic. Nano is a big buzz word right now with all sorts of different products. People know it means small, but from an industrial standpoint it means that the product should last longer because its nonstick nature has been manufactured at a microscopic level. We’re not so sure of these claims, but this is a results-oriented market, so let’s set that aside for a moment and see how it performs.

The Hype
Frying pans are big business, and companies spend millions of dollars each year marketing them to the public. Since a fry pan is not very amazing on its own, they have to get people excited enough about them to buy them, which usually involves an infomercial showing off some of the pan’s impressive abilities.

The Cost
The Yoshi Blue Pan is $36 which includes shipping, the lid, and a bonus slicer. This makes it about the same price as other ceramic pans in this class that make the same non-stick claims.

The Commitment
This should make cooking and clean up easier for most things that you’re going to cook anyway, so the only real involvement on your part would be to replace your current frying pan with this one. Since nothing sticks to it, clean up is a lot easier, so it should lessen the amount of time you spend on that task.

Evaluation
The Yoshi Blue Pan performs above and beyond expectations. They got it right with this, and you can tell that some craftsmanship went into it. Some pans out there feel like they’re the wrong weight, or show signs of being cheaply made, but the Yoshi Blue has a feel that it’s going to last you for years to come and be able to create hundreds of meals on it before it shows any signs of where and tear.

Diamonds? For Real?
They say that the pan is infused with diamonds. There are all sorts of diamonds out there though, and not all of them are like the ones you see featured on engagement rings. If the pan does actually contain real diamonds, they are probably the lowest grade ones you can find, which wouldn’t really matter for this application. It’s not as if they have to look pretty, since they aren’t visible on the finished product. Due to these diamond particles, the pan shouldn’t chip like other pans can, because it is not coated with anything. It is this coating that causes the problems found in many fry pans being sold today.

A Note on Nano
Nanotechnology is destined to become more than just a buzzword for manufacturers to use to sell their products. It involves working with things at the molecular level, and in the instance of the Yoshi Blue skillet it should make the non-stick coating surface that much more reliable. Ceramics are another trend that is sweeping the cookware industry, and combining the emerging technology of nano with the already time-tested benefits of ceramic, this is a good combination and something that is more than just a sales gimmick.

The Yoshi Blue Pan is the best nonstick frying pan we’ve seen, and we’ve check out a lot of them. Nothing comes close to the non-stick ability of this, and since it is using ceramic and not metal you don’t have to worry about it being a health hazard. The pans out there that have a non-stick coating are the ones to watch out for. The Yoshi pan has its non-stick nature right down to the core, which is where the nano bit plays in.

Be sure to season your pan before using it. This involves coating it with oil and putting it on medium heat until it gets hot, but before it starts to smoke. Empty the excess oil and wipe the pan down with a paper towel. You’re now good to go. If you don’t season your pan, you’re going to get bad results from it, so be sure not to skip this part!

Our Recommendation
We definitely recommend getting this, as we absolutely love it. If you haven’t checked out our video yet and want to see it in action, scroll back up and you can see us test it out with an egg and a piece of cheese. These are the two foods that you see in most every frying pan infomercial as being notorious for sticking to a pan. If you’re too pressed for time to watch the video here’s a spoiler: They don’t stick to the pan. Not only that but they slide right off of it, and you can make an over easy egg without breaking the yolk, and without using any oil. This makes it much healthier, and you’ll enjoy the natural taste for once.

What do you think? Does the Yoshi Blue Pan work or not?

← Previous Does the Krups Egg Cooker Really Work?
⚅ back to blog
Next →Is a CAP Barbell Kettlebell Really Different?

14 Customer Reviews on “Is the Yoshi Blue Pan Really *That* Non-Stick?”