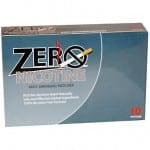 Quitting smoking can be one of the hardest things you’ll ever do, and Zero Nicotine wants to help. They take methods that have proven effective, such as a patch, and have made them all-natural and nicotine-free so it’s healthier for you. But can natural herbs and ingredients really help you overcome your addiction? We put it to the test and report back to you.

What It Is
Zero Nicotine is an herbal patch, worn much like you would wear the popular nicotine patches. Simply stick the patch to a recommended area and it will do the work from there. It uses a blend of ingredients such as peppermint, ginger root, eucalyptus, slippery elm, alfalfa, and licorice root. They say that each has been found to have properties in them that help eradicate nicotine from your system, or help you overcome the cravings and symptoms that come from nicotine withdrawal.

Pluses and Minuses of Using a Patch
Nicotine patches were the first solution to smoking that seemed to produce great results for the majority of users that tried it. By taking a successful delivery method and replacing the nicotine with natural substances, Zero Nicotine has a good game plan. Some of the homeopathic remedies out there involve spraying a tincture under your tongue, but this is not an effective way to deliver the needed ingredients.

By applying the patch directly to the skin, and letting it absorb the herbs over a 3 day period, you’re getting a slow, time-released way of getting it into your system. But because it is making direct contact with your skin, you may experience irritation and redness where you place the patch. That’s why it’s best to put it in an area that isn’t publicly visible, and to change the location each time you change a patch.

Red Flags
There are a few things about the Zero Nicotine product, and the company behind it, that raise some red flags. For example, they used to offer a free trial of their product, but it turned out to be a way for them to collect a person’s credit card information and bill them for a one-month supply. They have since discontinued this offer, but it still tells you something about the people behind it.

Also, this is an all-natural product, and there is always a reason to question what ingredients are used, especially if they are meant to replace a powerful substance like nicotine. Just because something is all-natural does not mean that it is safe for the body. In fact, some users have reported burning and scarring the same as if they had gotten a chemical burn. It’s natural for the body to react this way to high concentrations of herbal extracts.

While they do list their active ingredients on their website, and put pictures of plants and flowers showing where they come from, there is still no way to determine in what concentrations these are in, and how your body will react. Some might say they’re fine with a little burning on their arm if it helps them stop smoking, which might hold some truth if it actually worked.

What People Are Saying
Real reviews have been mixed. You can’t trust the reviews found at the Zero Nicotine website because they are baiting customers to call in and leave a review. If they choose your testimonial you get a free 6 month supply, so you can bet people are only going to leave positive responses for a chance at getting more free. Also, there’s no way that Zero Nicotine is going to post a negative review on their own site.

By observing reviews at third-party sites like ours, it’s easy to see that there is mixed opinions when it comes to whether or not Zero Nicotine works. There are some users that say they were able to stop smoking after several decades of being a smoker, while others say they couldn’t wear the patch long enough to see any results because it burned so bad.

Quitting smoking is very important, and the best bet for doing so is getting something to help you. Using a nicotine-containing product only keeps the nicotine in your system longer, so it’s best to use a nicotine-free smoking cessation kit. Zero Nicotine has a few good ideas, such as using an all-natural concoction, and delivering it via a patch, but in the end they miss the mark and a majority of real users say that it doesn’t work.

Every cigarette is doing you damage. so don’t give up your quest to quit:

Our Recommendation
Try Zero Nicotine if you have tried other products with no luck. Unfortunately, it’s a process of trying out different products until you find one that works for you. It’s not recommended if you have sensitive skin, as the patches will likely irritate you too much to be effective. However, the ingredients they use should work if used properly, and if you haven’t been a smoker for too long.

What do you think? Does Zero Nicotine work or not?

← Previous Does Pushup Pro Really Work?
⚅ back to blog
Next →Does Profollica Really Work?