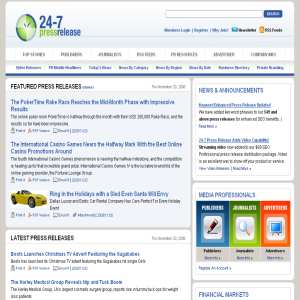 With 24-7 Press Release you have a lot of different options on how to distribute your news. They have everything, ranging from free to hundreds of dollars, so this seems like a good place to get your feet wet in the world of press release distribution. But how well will your message be received, and what sort of results will you wind up getting from their various price points?

Overview
When you send out your release it is pretty much a numbers game. The more eyeballs you get your message in front of, in theory should result in more traffic, phone calls, and e-mails. There is something to be said for quality versus quantity, but don’t forget that these are sometimes not mutually exclusive. There are distribution services that have a large quantity of top-quality news outlets and journalists that read press releases every day trying to figure out what they’re going to tell the world.

The Claim
24-7 Press Release claims that you’ll be able to be found on the top search engines, that they distribute your press releases to journalists, that your release gets sent through RSS feeds, that it can contain images, text links, and special formatting, and it you’ll be able to track how well it’s doing by following its statistics.

They say that you can be found on search engines like Google and Yahoo, but that isn’t really saying much. They don’t specifically state where you’ll be found, or how, so it’s kind of a vague claim. Technically, any website that’s been indexed can be found on Google, and surely their website is indexed, and pages they add to it will also be indexed as they’re added. Just because you can be found, doesn’t mean you will.

What Press Releases Do?
Writing and distributing a press release serves a few different purposes. It can increase the number of good back links to your website, which can increase your ranking in the search engines overall, but it can also lead to a surge of traffic to your site if it is compelling enough people to take action. Traditionally, they are used to get the attention of the media so that they will ask you for an interview, or invite you onto their show. It all depends on how you want to use it. Of course, if you don’t want to be interviewed, and don’t want to show up on TV, you simply gear your release towards providing information.

The Cost
24-7 Press Release says that you can get your press release distributed, including images, analytics for $49. That’s for the online only, and you can upgrade your release with SEO formatting for an additional $40. For an extra $50 on top of that you can get your release submitted to traditional media. And if you want them to throw in the kitchen sink, your total cost will be $389.

The Commitment
Your involvement in all of this will vary by how much you want to take on. You can hire someone to write your press release if you’re not very good with words, or you can do some research and write it yourself. The actual distribution process is pretty hands-off, and it mostly involves watching the statistics come in, analyzing them, and using that information to increase your reach on the next release.

Evaluation
24-7 Press Release only claims to have 60,000 members in their network, and to have only distributed 100,000 releases in 8 years. Those numbers seem rather low for a company that’s been around for that long, and has a free distribution option. But they screen their releases for quality, and don’t let anything through that has too much of that advertisement feel to it, or is blatant spam. So because of the quality control they have in place, they keep their numbers down, which should be commended and sets them apart from other low-cost and free services that take a “anything goes” mentality.

Buying Your Way Out of the Riffraff
Since they offer a budget priced service, you’ll be lumped together with other businesses that have opted to go low ball on this one. You’ll notice a substantial increase in the quality of press releases when you go with a service that costs roughly 6 times as much. It’s a way of charging admission fee that allows for only more serious companies to take advantage of. They also allow people to send one free press release per day, so it seems like there’s a hodgepodge of free press releases, and paid for upgraded press releases all grouped together.

24-7 Press Release is a pretty good service if you’re just starting up your business and don’t have a lot of capital to spend on one press release. Paying $300 or more for press release when you’ve just gotten your business going can be a pretty big risk, because there is no guarantee that you’re going to get the kind of results you may be hoping for. By putting together a well-written press release, and going with even their most basic package, you’re at least going to get the benefit of several back links going to your homepage, and you could end up getting additional exposure.

Our Recommendation
Because of their low barrier to entry, including free releases and a $49 option, we recommend going with a more expensive service for your important releases, if it’s in the business budget. Consider PRWeb as one option, they’ve got one of the widest press release distribution networks out there. If you want the same sort of reach with a little more of a human touch, though with eReleases. They can even write your press release if you need it done.

What do you think? Does 24-7 Press Release work or not?

← Previous Does the Awesome Nozzle Really Work?
⚅ back to blog
Next →Does the Sienna Aqua Laser Steam Mop Really Work?