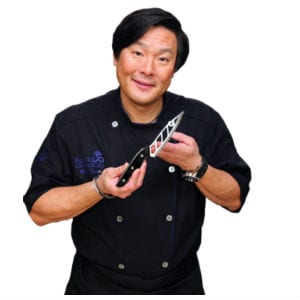 The Aero Knife is a knife that has less surface area thanks to the big gaping holes it has where a normal blade would be. This is supposed to make it so that food has nothing to stick to so it can cut through food without slowing you down. But what about using it on real food in real situations?

Overview
Knives are one kitchen product that is not short on revamps. There’s always someone trying to make a better knife, either by making it sharper, making it last longer so you don’t need to sharpen it, or making it easier to hold in the hand so your hand doesn’t get tired. Here the main focus is on the ease of which the knife goes through food, and how food does not stick to it.

The Claim
The makers of Aero Knife say that you can make smooth, clean cuts with it because it so sharp and strong, but that foods won’t stick to it, even foods that are notorious for sticking, like tomatoes and cheese. They say that it has an aerodynamic design, but aerodynamics won’t really factor into a knife, because it’s not going to go up against a lot of wind resistance.

The Hype
The hype here is the same sort of hype that comes with knives that are sold on TV. They show it cut up hard things like wood, and then slice a tomato in half. They have Ming Tsai pitching this knife, and you may remember him from such TV shows as Top Chef or Cooking Under Fire

The Cost
The Aero Knife is sold on a 2 for 1 just pay extra shipping setup. So while the price may be listed at $10 the actual final price is going to be $25 and that is going to get you two knives plus an Edge of Glory sharpener. The 30 day money back guarantee is unlikely to be used by the majority of consumers, even if they’re unhappy with the knives, because of the $25 spent, only $10 will be refunded in the event that the knives are returned in the 30 day evaluation window.

The Commitment
This should make it easier for you to cut through many of the most common foods out there that cause a problem. Any food that gives you grief when you cut it by sticking to the blade should not be a lot easier when you have one of these. It’s not going to work on every single task that you have in the kitchen, so you’ll still need to keep a traditional knife set handy for the different sizes and shapes, but a lot of prep work that needs to be done this knife will have you sorted.

Evaluation
Knives are an easy sell because all you have to do is show that the knife is sharp and can cut through things. They make a pretty convincing case that it works by showing it cut through cheese and tomatoes, and the video below shows a real person putting it to a real world test. While he shows that it does indeed cut as shown, he should have done a follow up piece that shows how it cuts weeks later after using it more than once. Any knife, from a cheap $2 throwaway to a $200 professional grade knife will cut through things the first time you open it and put it to use, but the difference is how it stands up to repeated use in the kitchen.

They say this never needs sharpening but %7 of the purchase price is the shipping charge for a knife sharpener. Seems like a bit of a contradiction. Usually when a company says that a knife never needs sharpening, or that there’s a lifetime sharpening service included as long as you send them the knife, it’s because they know few consumers will bother to return a knife to have it sharpened. Few knives out there will really stay sharp forever, especially with repeated use.

The Aero Knife is getting our Risky Try rating because it’s getting spotty reviews from actual users. The consensus is that it is cheaply made, is prone to rust, and doesn’t stay sharp. While it may appear to work in videos, that’s likely because it is brand new out of the box, but what we’re really after is how well it works over time, and whether or not it really is a worthy purchase.

Our Recommendation
A knife is arguably one of the most important pieces to your kitchen ensemble. While it’s nice to think that you can get that part of your kitchen sorted for cheap, if you plan on doing a fair amount of cooking it only makes sense to invest in a good knife set. Here’s a well-reviewed knife set for under $100 that will have you totally set in this department.

What do you think? Does Aero Knife work or not?

← Previous Does the Miracle Cloth Really Work?
⚅ back to blog
Next →Does the One Razor Really Work?

3 Customer Reviews on “Does the Aero Knife Really Work?”