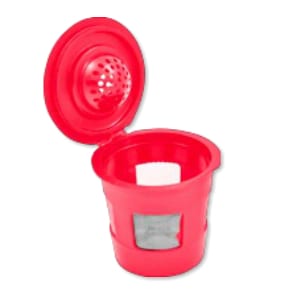 If you’re tired of paying top dollar for those one-cup-at-a-time coffee makers, the Cafe Cup is presenting itself as the solution. They were also marketed as Klever Kups, and the idea is that you use can use ordinary ground coffee in these machines, no longer being forced to by special K-Cups made by the manufactures of the coffee makers. But how does the coffee actually taste, and does it even work?

Overview
Single service coffee makers have been all the rage the last couple of years, and many people have embraced it as a way to make coffee as needed, without having to brew a whole pot just for a cup or two of coffee. They’ve also been noted as making good tasting coffee, as well as being able to switch up with different flavors to suit whatever mood you’re in. But they do limit you as far as what coffee you can have, making you choose from their flavor offerings, and having to basically ignore all of the wonderful ground coffee that’s out there.

The Claim
The makers of Cafe Cup claim that you’ll be able to start using them instead of the more expensive K-Cups and other pre-packaged pods that go into the various machines. They say this can bring your total cost per cup of coffee down to 5 cents each. They claim that you can expect to pay upwards of 70 cents per cup with the traditional way to go, so this is really a significant savings if you go along with their calculations. They are likely using the cheapest possible ground coffee to get to 5 cents, and using the most expensive K-Cups for the 70 cent example.

The Hype
This product is basically riding on the success of the single cup coffee makers, and the overall impression that while they might be more convenient, you end up paying for that convenience in the form of a higher cost per cup. There will likely be other products that are similar to this, and you might even see Keurig start to offer a competing product if this becomes successful and starts cutting into their bottom line.

The Cost
You get a double Cafe Cup set, which is a total of four cups and two scooping spoons for $25. This might sound like a lot of just a couple of plastic cups, but the big draw is being able to cut down on your daily cup of coffee costs, which could really add up in a short amount of time, if you’re a daily coffee drinker. If you drank a cup a day and were able to find K-Cups at 50 cents each you’re looking at a monthly total of $15 a month, and if you get your cost per cup down to say 10 cents a cup with this you are looking at just $3 a month.

The Commitment
This should allow you to make a cup of coffee faster than you would with a traditional coffee maker, but is going to require just a bit more effort than if you used a pre-packaged K-Cup. Overall, you’re still getting a quickly made cup of coffee with less fuss and less waste created.

Evaluation
The Cafe Cup is a smart idea and it was only a matter of time before a product like this was introduced to the market to fill the need of a cheaper way to use these one-serving coffee makers. They point out that they are not affiliated with the Keurig company, but we all know that these are the brand of machines that are most popular, and what you’d be using these for. They also mention that there’s no affiliation with Green Mountain Coffee Roasters, a K-Cup maker that would likely suffer if these Cafe Cups become mega popular.

The part that might be overlooked in all of this is that this is a sort of green product because it reduces the amount of waste involved with using K-Cups. Obviously the Keurig company doesn’t want an idea like this to catch on because they’re making big recurring profits by selling the coffee along with the coffee machine. But contributing extra waste to the planet unnecessarily is something that none of want to do, and if we can get a product like this that allows us to have the same result without the extra trash it’s a welcome idea.

The Cafe Cup concept is a sound one, and early reports are saying that it does function the way it’s supposed to, providing the results you’d expect, namely a freshly brewed cup of coffee in no time. Users have said that they especially enjoy the ability to change up the coffee and try different blends that can be found at every supermarket. You can even try gourmet blends if you’re looking for flavor and not so concerned about the cost per cup.

Our Recommendation
If you enjoy a daily cup of coffee and have found yourself complaining about the cost and wastefulness of the K-Cups that make it work, you’ll likely enjoy this solution. It’s especially true if you prefer the taste of a certain blend of coffee and have been missing it since switching to a one-cup coffee maker. This is a way to brew your favorite ground coffee one cup at a time, without creating excess waste, and without paying extra for the privilege.

If you don’t want to order from the manufacturer and pay those ridiculous S&H fees, you may want to check out the Solofill Reusable Cups.

What do you think? Does a Cafe Cup work or not?

← Previous Are Silkies Really Comfortable?
⚅ back to blog
Next →Does Gazelle.com Really Work?

44 Customer Reviews on “Does a Cafe Cup Really Work?”