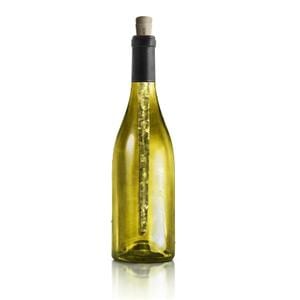 It’s a cork, it’s an icicle, it’s a Corkcicle? This is the gadget that’s designed to replace the old standby of an ice bucket, and also to fix the problem of just leaving your wine bottle out in the open while you enjoy it. Once you see how it works, it’s only natural to wonder if it actually does. It doesn’t leave much to the imagination, basically being an icicle shoved straight down your wine bottle. So let’s see how it sizes up.

Overview
This might be an example of a product that solves a very mild problem, or even tries to create one. But if you relate to having a sweating bottle of Pinot Grigio and wishing there was a clever way to keep it chilled while you sit back and relax with a glass and some of your favorite company, this could be for you.

The Claim
They claim that an ice bucket is a mess, and keeps your wine too cold. They also claim that drinking a bottle of white wine too slowly makes it taste too much like alcohol as it warms up. By keeping it at just the right temperature, you can leisurely enjoy your wine and not have to race to finish it before it goes warm. That’s exactly what they say the Corkcicle does, maintains an even temperature so you can drink at your pace and not rush things.

The Hype
The hype is that this solves a very narrow problem, those that drink their white wine too slowly. It would make a good and thoughtful gift for someone you know that loves their wine. At that point it wouldn’t matter if it works or not, because it’s the thought that counts.

The Cost
You can pick up a Corkcicle for less than $25 from their official site. This is just about as much as they could charge for something like this, and they mostly get away with it because it deals with the affluent wine drinking market.

Evaluation
One point of clarification is that the Corkcicle won’t actually chill your wine like an ice bucket will. You have to start with a refrigerated bottle, and the Corkcicle will only serve to keep it at its original temperature. If you are looking for a way to fast chill your wine, definitely go with the old ice bucket, as you can’t go wrong there.

Another point of clarification is that you can’t just go sticking the Corkcicle in to the bottle as soon as you open it, you have to pour the first glass to give it enough room or else it will disperse the wine that’s in there and you’ll make a big mess.

Also, it looks like a real icicle on their sales page, but it is in fact just an artificial plastic piece that looks like an icicle when it’s in the bottle.

Real world testing shows that this doesn’t really do much compared to just leaving your bottle of wine sit out in the open. It’s also unclear why you wouldn’t just put the rest of the wine back in the refrigerator until you’re ready for your next glass. A bottle of wine holds 4-5 glasses so if you are having anything resembling a party it’s usually not that hard to kill off a bottle pretty quickly.

If you’re thinking about presentation, this might be something that gets people to do a double take and wonder what it is, but aside from that you’re probably not going to seem to eclectic sitting around your frozen plastic rod.

Surprisingly, no one has mentioned a freezerburn taste being added to your wine, or the taste of plastic either, as this is what it’s mostly made of.

We’ll give this a thumbs up, but only as a novelty item. Don’t expect to have the perfect wine experience because of it, but do expect to get people to ask you what the heck it is at your next party. It’s been shown pretty conclusively that while it does cool off your bottle of wine, it only does so by a few degrees, which is a negligible amount really, and this would only come in handy if you are drinking your wine very slowly and enjoy leaving your bottle out in the open.

Our Recommendation
The Corkcicle may look strange at first glance, but it’s definitely worth a try, at the very least as a conversation starter at your next hosted get together.

What do you think? Does Corkcicle work or not?