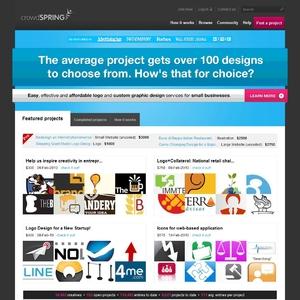 crowdSPRING promises to make your next logo or design purchase less of a hassle. They do this by putting you in touch with a pool of designers all eager to give your design a shot and see if you like their work. The theory is that out of this pile of attempts you’ll find one that you like and be on your way. But don’t worry about the logos you didn’t choose, just think of it like you’re on the show The Bachelor or Bachelorette, and you can only give a rose to one of the contestants.

The Claim
crowdSPRING claims that they are the number one marketplace for logos and graphic design. It’s hard to see how they can make this claim, because it seems that bigger sites like eLance or oDesk would have more companies available to make logos and complete graphic work. They also say that the average number of submissions per project is over 110. This would be quite impressive, and would increase the likelihood that you would be able to find something you like out of a batch of over 100 versions to choose from.

They also have a money back guarantee is in place that claims to make it risk free for the buyer. However, you are stuck with the listing fee, so it’s not exactly a risk-free proposal.

The Hype
The hype is that this is a newer sort of model that has been popping up, and it’s a sort of Web 2.0 way of getting things done. It snubs the old model of choosing a company or person first and then seeing what they come up with. This is a form of crowdsourcing and it basically is made possible thanks to the Internet.

The Cost
The costs are relatively higher than working with one company. For example, the projects start at $269 for a logo. If you went with a single design firm, you can get this cost way down.

The Commitment
Since you have to pay up front, you are committed to at least seeing the project through its different steps, and reviewing all of the different samples that get submitted. With their money back guarantee in place, you won’t be forced into choosing a design if you don’t like any of them. It can be a bit overwhelming to have to sort through dozens or over 100 different concepts.

Evaluation
The work that is completed looks really good. This isn’t just sketches or mock-ups of what your design might look like when it’s finished, these designers are submitting completed, photo-ready work. That’s pretty impressive, especially if you yourself don’t have any design skills. If doing it yourself is not an option, then the sort of quality you’ll get from the designers at crowdSPRING is top-notch. When you compare this with the alternative way of getting work done, it’s the better choice, hands down.

The other way you can do it is to post what you want on a site like eLance, and then you’ll get dozens of companies trying to convince you *with words* that they are the best ones suited for the task. The old adage is that a picture is worth 1,000 words so rather than listen to all of their pitches, wouldn’t it be better to just have them submit what they hand in mind. The only trade off is that you have to be willing to tell your idea to a pretty open forum, so if you were wanting to keep things hush hush, you still might want to go the old way and just deal with one designer at a time.

The Spec Debate
Working on spec is usually frowned upon at most freelance sites, and most sites forbid their workers to submit spec work. This is because it’s basically considered doing work for free, which from a designer standpoint can leave a bad taste in your mouth if your work isn’t chosen. Even if you’re a really good designer and you submit a good design, you still stand the chance of another designed besting you, and therefore the time and energy you put into the work is wasted.

Since design work is so customized, it’s not as if a designer can sell that work to someone else, it’s basically lost time. So while this model works out for crowdSRPRING and the consumer, it’s kind of a raw deal for 99 out of 100 designers that did work but didn’t’ get paid.

The other side of the debate is that if you are a high quality designer, your work should get chosen at a higher rate than a lousy designer. If you have a knack for reading project requirements and translating that into the design they really wanted, you stand a good chance of being chosen. If you’re good at it it shouldn’t take you very long either. Compared to running your own design website and trying to find customers, you can win awards at crowdSPRING and build up your own client base as you get repeat business from clients.

crowdSPRING works great from a consumer standpoint. You end up getting a ton of different looks instead of choosing blindly at other freelance sites. Rather than look through dozens of portfolios and try to find a company that has done something similar to what you want, you can tell a forum of designers what you want and see what they come up with.

Our Recommendation
With the money back guarantee in place, it’s not a bad idea to go with crowdSPRING, especially if you’ve had trouble in the past getting design work done by individuals or small companies. This way there’s not a lot of back and forth as one person or company tries to get it right. They try to get it right first and then you choose which one is closest to your vision. If they all get it wrong you just opt out of the transaction and you’re back at square one. You can try 99 Designs and see if their pool of designers can fare any better.

What do you think? Does crowdSPRING work or not?

← Previous Does the Slush Mug Really Work?
⚅ back to blog
Next →Does ineedhits Really Deliver?

10 Customer Reviews on “Does crowdSPRING Really Get Results?”