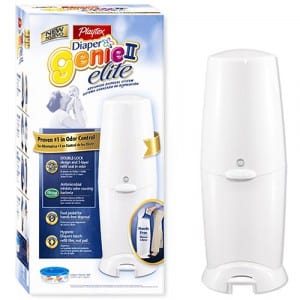 The Diaper Genie is brought to you by Playtex, and has been around in one form or another for over a decade now. It’s a way of storing and disposing of your baby’s used diapers without having to deal with the smell. We’d all love to have a better-smelling, more hygienic home for our babies, our family members, and ourselves, so this is definitely a product worthy of further consideration.

Overview
One of the more unpleasant tasks with a new baby is diaper duty. Not only the changing part, but what to do with the diapers once you’ve managed to contain the mess. Putting them in with the rest of the trash doesn’t work, putting them in a diaper hamper just concentrates the odors, and taking them outside one at a time gets tedious. So it’s no wonder that a product that attempts to solve the problem once and for all has gotten so much attention from new moms and dads.

The Claim
The Diaper Genie claims that it controls diaper odors by sealing up each individual diaper in its own plastic baggie, effectively trapping the smells inside and keeping things more hygienic. The Elite model bags are lined with an anti-microbial substance so this should keep your baby’s changing area cleaner overall. When it comes time to clean the unit out, it’s easy enough because all of the diapers are strung together in a line, and still sealed so they don’t stink up the place.

The Hype
Since this unit has been around for a while now, the initial buzz has pretty much died down, and now it’s pretty much known on the whole parent scene. It’s even rare to see any ads for it on TV or online, it pretty much relies on word of mouth from satisfied parents. The only real question that people have is whether it really does manage to trap in the odors, and if there has been any other invention since its debut that does a better job.

The Cost
There are two things you’ll need if you want to use the Diaper Genie continually. You’ll first need the main unit, which will run you about $35 if you go with the Essentials model. This will get you started with your first pack of plastic liners, but you’ll eventually run out. Replacement packs of liners can be had for about $20 for a 3 pack which is good for 810 diapers, or about 2 cents per diaper.

The Commitment
When evaluating what sort of changes you’ll have to make to your lifestyle in order to use this, you have to compare your current method to the way this one works. If you’ve got an ineffective way of disposing of diapers, and have just gotten used to the smell, this will be an upgrade to your quality of life and will be worth learning how to use it. Once you’ve got the system down pat it won’t take any extra time at all, and you should have a pretty fast and effective way to get rid of smelly diapers.

Evaluation
The Diaper Genie has gone through different design tweaks and changes over the years, and they’re always making further enhancements and improvements to make it a better product. This is something that we like to see in a product that had initial success and has been on the market for a while. It shows that the company is taking into consideration real world user feedback, and incorporating what people are saying into the latest versions. Of course it does improve their bottom line, but it’s better than resting on your early success and just milking it.

The current models are the Essentials and the Elite, both of which get mostly positive reviews. The Elite model says it’s hands-free, removing the need to twist the top three times in order to seal the diaper. This can come in handy when your hands are otherwise unusable, either because they’re holding the diaper, or you managed to get some of the mess on them, as is sometimes the case on a big clean-up job. The Elite is a bit more expensive than the Essentials model, so be sure to weigh the added features to decide if it’s worth it in your situation.

We’re giving the Diaper Genie a Solid Try rating, based on the longevity of the product, the feedback on the current models, and the fact that in the world of diaper disposal there just aren’t too many great options to choose from. It can be embarrassing to have your entire home smelling of dirty diapers, so much so that you might not even be having company over because of it. Don’t let this put a damper on your social life. The best way to fix it is to try a few systems and see which one works best, and this is a good place to start.

Our Recommendation
When looking at the long term costs, this is a product that is going to have a nominal impact on your budget, but could potentially make this time of your child’s life much more enjoyable for everyone involved. For that reason we recommend giving it a try, since it beats trying to come up with your own diaper disposal method. The majority of users say it either eliminates odors completely, or greatly reduces them to the point of being a trifling annoyance.

What do you think? Does the Diaper Genie work or not?

← Previous Does Magic Minerals Really Work?
⚅ back to blog
Next →Does the Dead Sea Beauty Kit Really Work?

10 Customer Reviews on “Does the Diaper Genie Really Work?”