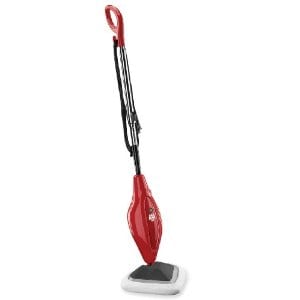 If you’re considering a Dirt Devil steam mop you were probably originally lured in by the brand name. This happens a lot when companies expand their product lines, but a steam mop is a pretty far leap from handheld vacuums that compete with the Dustbuster. When you introduce steam into the equation, you change the ballgame. So let’s see how this line of mops measures up when it goes head-to-head with the top-rated steam mops out there.

Overview
As technology improves, keeping your house clean should get easier and easier – in theory. So many new products are coming out these days claiming to revolutionize the cleaning process. Some of them say they can do five jobs in one, others say they can double as a vacuum and a mop. When you think about it, the right tool will make your cleaning go a heck of a lot smoother, so it’s all about building up the right arsenal or products to tackle various jobs, and reduce the amount of effort you put in.

The Claim
There are many different Dirt Devil steam mops to choose from. Their most popular is the Easy Steam Deluxe, and it claims that it distributes steam evenly across the mop head so you don’t get any extra damp spots, and that leaves your floors nearly dry, and sanitized. Because of its V-shaped head, it gets into corners very easily, and pivots so it gets around furniture and other obstacles without a problem. It says that it can start creating steam in just half a minute due to its 1500 watts of power. It also claims that it comes with everything you need, so you won’t have to buy accessories for it, including microfiber pads, a dusting pad, and even an attachment so that you can use it on carpeting.

The Hype
The hype is that this is a brand name that you probably recognize, and you might even figure that they could put together a good steam mop because of their experience in the vacuum industry. But steam is a different sort of technology, and even though it doesn’t seem like much, it takes some craftsmanship to get it right. This is because you have to heat the water up so much that it becomes steam, and this can cause the parts to break down, melt, or start leaking, well before you would expect it to.

The Cost
You’re looking at right around $50 for a Dirt Devil steam mop. Some of them are a little less than this, and some are a little more, depending on what features you’re getting. This price point represents the low to mid range for good quality steam mop.

The Commitment
Using a steam mop requires a little more commitment than you might be used to. There is a bit of a learning curve as to how much steam is enough to get the job done, without leaving your floors full of water. But when it’s all said and done, it is easier to clean up tougher jobs, and it doesn’t require going around with a mop and bucket, so overall you’re getting away easy.

Evaluation
It’s interesting to note that while Dirt Devil vacuums get consistently high reviews and ratings, their line of steam products gets mixed reviews. This is because Dirt Devil has been perfecting its craft on the vacuum side of things for several decades now, but only recently have they started trying to get into the steam mop arena. Basically they are trying to capitalize on the growing popularity of steam mops, ever since the Swiffer WetJet came out and showed homeowners that they don’t need to use a traditional mop anymore.

There are many competitors to the Dirt Devil steam mop. That’s why you shouldn’t just go with this based on price and brand name recognition alone. There was a time when Dirt Devil was the newcomer and needed to establish itself as a trustworthy company. It’s always good to give new companies a shot, especially when they are showing signs that they’ll be around for quite some time. You can usually get a good bargain this way, as they’ll usually aim to compete on price so they can gain some market share, and then look to make a new line of upgraded products after they’ve established themselves.

A Dirt Devil steam mop might seem like a good buy, because of the recognizable brand name, but Dirt Devil is not known for their steam capabilities per se, and steam products are something that you want to go with a company that either specializes in them, or has a history of producing quality steam machines. It’s not just something a company should dabble in, which it appears that is what’s going on here, and the feedback is mixed, as expected.

Our Recommendation
The Shark Steam Pocket Mop is getting our recommendation instead of the Dirt Devil. It’s got much more features packed into one unit, and you don’t have to worry about which model to go with, as they just have the one. Shark is making waves in the cleaning product industry, with top-rated vacuums and steam mops. Overall, user feedback has been pretty stellar with this mop, and people are happy with the way performs. While we can guarantee your happiness, it’s really all about probability, and there is a high chance that you’ll enjoy it.

What do you think? Does Dirt Devil Steam Mop work or not?

← Previous Is JustCloud Really the Backup Solution?
⚅ back to blog
Next →Does TapouT XT Really Get You MMA Fit?