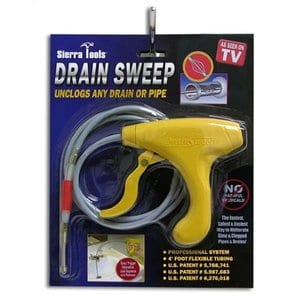 The Drain Sweep looks like it’s something a professional would use to unclog a drain, and it’s supposed to snake out your drains and unclog them so they’re back to normal. It’s one of several DIY drain uncloggers to come out in recent years, and many are wondering if this is the key to being plumber-free.

Overview of the Problem
Drains can get clogged for any number of reasons, but the number one offender is hair. Hair finds its way into a drain and then snags on the edges of the pipes, accumulating over time and blocking the flow of water. It starts off as just a slow drain, but gradually gets worse and worse and can sometimes bring things to a standstill. In the shower you might even find that you’re ankle deep in your own greywater.

The Claim
The Drain Sweep device claims that it’s a easy and chemical-free way to clear out your drains. They say you will never have to call a plumber in, because you’ll be able to handle your own clogs by yourself. It’s supposed to work by grabbing the debris that is clogging the drain, and yanking it out.

The Appeal
The reason that there are so many potential buyers for this product is because it is a common problem and sometimes the solution can be expensive. Most people first attempt to unclog a drain by using something like Drano, and if that doesn’t work the problem persists until the finally give in and call a plumber to snake the drain. The appeal of Drain Sweep is that you could potentially avoid costly plumber visits, and be able to fix flaws as they occur, rather than getting to the point where you’re dealing with the issues that come with the clogged drain.

The Cost
The cost of the Drain Sweep unit is relatively low at around $13, which leads him to become suspicious that it might not work as well as it is shown to. But it’s not the only drain clearing product on the market for under $20. The Turbo Snake clocks in at $17, so it’s not unprecedented to come up with a declogger for a reasonable price.

The Commitment
An attractive feature of the Drain Sweep is that it is supposed to be very easy to use, and doesn’t take very long to get the job done. No matter how you cut it, a clogged drain is going to take up some of your time and attention, unless you call in someone to clear it for you. Even if you’re using a chemical like Liquid Plumr, you still have to follow the directions and take the time to use it. Overall, if this can fix the problem the first time every time, you are saving some time and hassle, and also making a greener choice.

Evaluation
The feedback on the Drain Sweep has been mixed, with some users saying that it works like a charm, and others saying it was unable to do the job they had in mind for it. This is not surprising because if there are 100 clogs in 100 different sinks and bathtubs few products are going to be able to get out 100 of them. It’s a bit of a gambit trying a product like this because if you get it and it works you just found a $13 solution that keeps the plumber at bay. But if you get it and it doesn’t work, or breaks, you’re out the $13.

Not all clogs are created equally. It could be that some users are biting off more than they can chew and a professional was needed from the very start. There are also many different types of drains out there, and many showers and sinks have drain stops on them that can make it hard for a gadget like this to get through. But there are also reports that the Drain Sweep is cheaply made and falls apart easily. You have to take into consideration the clog you have in your home, and whether you think it will be able to be unclogged by drain snake of this caliber.

At this price point we’re willing to give the Drain Sweep the benefit of the doubt. It’s been shown to work in some instances, and for minor clogs it should work fine. We have our doubts as to whether it could tackle a big clog, or pull out a foreign object, so use your judgement as you size up the clog you have in your own home.

Our Recommendation
If you’re pretty sure that the clog you’re dealing with is caused by hair, we’d recommend getting the Turbo Snake, because that’s its forte. It has little Velcro-like hooks on the end of it that grab the hairballs and don’t let go, pulling the entire glob up and out of the drain.

What do you think? Does Drain Sweep work or not?

← Previous Do Bed Bands Sheet Straps Really Work?
⚅ back to blog
Next →Does the Stretch-tite Wrap’N Snap Really Work?

10 Customer Reviews on “Does the Drain Sweep Really Work?”