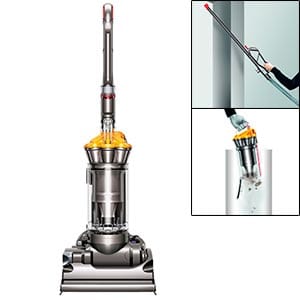 The Dyson DC33 is one of the flagship products from the Dyson company, and is still one of their best-selling models. If you’re familiar with the brand, you probably know that they’re known for their powerful suction, the fact that they don’t lose suction as the bin fills with dirt, dust, and hair, and that they are a tad on the expensive side. If you’re a savvy customer, you don’t mind paying a little extra for quality, and a product that works much better than lesser priced models, so let’s see if that is the case here.

Overview
Before Dyson came along you were pretty limited in your choices. You could get cheap vacuums at the local supermarkets or big box outlets, typically costing less than $100, or you could get sold on a premium vacuum cost ten times as much or more from a door-to-door salesperson. There wasn’t anything in between that could get all the dirt out of your carpets, but not cost you an arm and a leg. Then Dyson came along, promised that you could clean your whole home without losing suction, and did it all without using vacuum cleaner bags.

The Claim
The Dyson DC33 is a standard upright vacuum cleaner, but it features the no loss of suction claim that put Dyson on the map. Aside from that it doesn’t make too many claims, it just lists its features, like having a washable HEPA filtration system, so you won’t have to worry about that building up and becoming ineffective. It also has the patented root cyclone technology, which is why it doesn’t lose suction, and maintains its power.

The inherent claim is that a Dyson is going to make your home a cleaner place to live, and the air cleaner to breathe thanks to its filtration, although they don’t explicitly state this.

The Hype
The hype is that it’s a Dyson, and they’ve developed a pretty strong reputation for being a vacuum like none you’ve ever seen before. A lot of their new technology focuses on using a ball instead of wheels so this is kind of an older style, but it still has the same sucking power that you’d expect from it. There has never really been this much hype over a vacuum, but the guy behind these really invented something that works, and people really love it, so they’ve got quite a cult following going on.

The Cost
You can get the Dyson DC33 for about $320 which will include shipping if you get it from Amazon. Yes, this is comparatively expensive when put up against other upright vacuums, but you probably wouldn’t even be considering a Dyson if you were happy with the performance of your last vacuum, so you could go out and buy another one, and another at $100 or so each time, or you could just buy one Dyson and be set for 5 years or more.

The Commitment
Unlike a Roomba you will be the one that has to move the vacuum all around your home in order for it to be effective. This can be a pretty big commitment, especially if you have a lot of people in your household, as the rule of thumb is to vacuum once per week for each person living in your home. Good news if you’re living alone, bad news if you have a family of 5 or even 7!

Evaluation
The Dyson DC33 doesn’t have the ball action, so you might have a little trouble swiveling around corners and making your way through your house, but if you’re familiar with uprights, it will probably be easier to handle than other models you might have used. The first thing you’ll notice is how light it is. The next thing you’ll notice is all of the tools and attachments can be extended so you’ll have no trouble getting to places that you just couldn’t reach with other vacuums.

Dyson didn’t get so popular so quickly by pissing a lot of people off with poor products. You can’t develop a name like this without making a lot of customers happy. This model is no exception and the DC33 enjoys a very positive rating on almost every third party review site out there. Of course you can disregard the positive feedback that is listed on the official page, but even doing that it still shows that the overwhelming majority of buyers are happy with their purchase.

The Dyson DC33 may be a little old school in the world of Dyson’s but it still bears the name. It’s pretty much your standard upright vacuum, only a lot more powerful, and with great features like being able to take on both carpets and hardwood and linoleum, and also being bagless so you don’t have to worry about buying replacement bags. It’s also got a 5 year guarantee on its parts, which pretty much trumps anything else in this class of vacuum, in regards to a warranty.

Our Recommendation
You can’t go wrong with a Dyson. Sure they’re more expensive than say a Hoover or other model you can buy off the shelf, but they’re designed to last longer and do a better job in the meantime. When you compare it to something like the $1000 or more Kirby that they come selling door to door, you can’t go wrong here. You’re going to get superior cleaning performance, a smaller weight, and a much better price, with no negotiating needed.

What do you think? Does Dyson DC33 work or not?

← Previous Does the Kymaro Body Shaper Really Work?
⚅ back to blog
Next →Zojirushi Rice Cooker Really Work That Great?

6 Customer Reviews on “How Well Does the Dyson DC33 Really Work?”