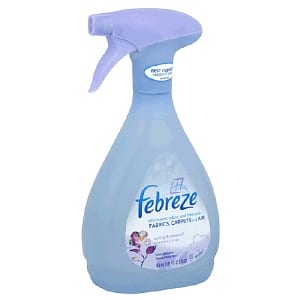 Febreze has come a long way since their early beginnings as a simple fabric refresher. Now they have an extensive line-up of products ranging from scented candles, to room deodorizers, to being an additive in laundry detergent. But is their success due to a clever marketing campaign, or are people buying it up because it really works? We put our review team on it to come up with the answer.

Overview
It’s often the case that when a product becomes successful it branches off into spin-offs and other useful items for the home. Such is the case with the Febreze product line, and now you’re armed with all sorts of ways to get your home, car, or office smelling the way you want it to.

The Claim
The basic claim behind Febreze is that it isn’t just adding a new scent to items or the air, but rather that it’s eliminating it entirely. The process behind this is patented and involves the use of a special sugar molecule that acts to entrap offensive odors and remove them from our sense perception. So it’s not as if it’s getting rid of the odors, but encasing them so we don’t smell them.

The Hype
They run a pretty steady amount of ads for Febreze, which keeps it in your subconscious for when you get to the store. You might find yourself instinctively reaching for it in the grocery aisle, or wonder why you’re suddenly looking it up online to see if it really works. It’s one of those hard goods that is very effectively sold through a combination of product placement in the store, and a steady stream of television ads that usually results in purchase. This can be good if you really do need an air freshener, or it might lead to an unnecessary purchase if their psychology works.

The Cost
The prices on Febreze range from about $3 for their vent packs that go in cars, to about $5 for a bottle of their more traditional spray bottle. Their prices are pretty competitive, and they don’t jack up the prices due to all of the advertising that is spent on them. You might pay a slight premium for Febreze of another rival like Glade, but the theory is that the other products won’t be able to match the effectiveness because they can’t use the same process as it’s protected.

The Commitment
The nice thing about Febreze is that you don’t have to do too much to use it, all of their products are either set-and-forget or spray and walk away. In olden times, circa the 1990’s you had to keep a bottle of potpourri spray handy and use it to cover up a stinky room. If you had bad-smelling fabrics like sofa cushions or comforters it was a real chore to have to wash them just to get the smell out. Many times they weren’t necessarily dirty, they just needed some freshening up. So in that respect Febreze does make things easier.

Evaluation
It’s easy enough to try out Febreze and evaluate whether it does the job of getting rid of odors. It’s not overly priced compared to other room deodorizers and air fresheners, but the key is to play to their strengths. Any time a company comes out with so many different product types they’re sure to miss the mark on a few of them. But overall, users seem to be very happy with the performance of the various products, and have no worries about buying it in bulk.

The concept behind Febreze is a solid one, and it does seem to really work on eliminating odors and not just masking over them. Of course there are some products that get better reviews, so it’s not always a sure thing. Here are some of the products they offer that hit the nail on the head: Air Effects (all scents), Fabric Refreshers (all scents), Laundry Odor Eliminator, and their Allergen Reducer Air Freshener. These show strong user satisfaction, and you can be sure they’ll get the job done in your home as well. Some of the scents they make for other products don’t go over too well, but if you stick to the Gain scent, or their original scent you should be good to go.

Our Recommendation
The best line of defense against bad smells and odors is to avoid the offending source altogether. If that’s not an option then you have to bring in some reinforcements to get your home or car smelling good again. Overall Febreze has shown high levels of effectiveness and has proven that they’re not just a one trick pony. They’ve successfully branched out the label into other areas and continue to expand their brand, even going so far as to patent the process to prevent other companies from stealing their method.

What do you think? Does Febreze work or not?