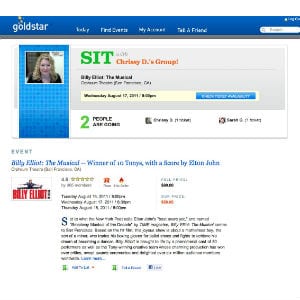 Goldstar has the slogan Go Out More, and their angle is that they can help you see more and do more by coming up with decent ideas and then giving you discounts on them so you can save some money. But is it worth signing up for?

Overview
They bill it as if it’s a community of users all with the common interest of going out more and doing more things, which all of us would like to do, but sometimes it can be hard to come up with things to do, and even harder to justify the cost.

The Claim
Goldstar claims that they are able to offer discounts to their members because they have relationships set up with different entertainment companies so that they can help to move some of the cheaper seats that sometimes go unsold. This means you’re unlikely to get front row seats to the events they have listed, but the idea is that you’ll be exposed to activities that you wouldn’t have known about otherwise.

The Hype
With sites like Groupon and LivingSocial moving into the same sort of territory, it seems there are plenty of companies out there trying to get people more active and doing more things in their local neighborhoods.

The Cost
It only takes your email address and zip code to sign up for Goldstar, and the process is pretty easy and straightforward. They ask you to invite your friends, but you can skip over that part. At no time are you asked to verify a credit card or pay any sort of fee to sign up.

They do have a more advanced membership called Red Velvet. This is billed at either $20 a quarter or $50 for a year. It gets you the ability to cancel your order, access to better seats, and also the ability to put tickets on hold while you sit and figure out if you want to go. It has a 30 day free trial so you can get an idea of whether or not you’ll be using it enough to justify the added expense. This is in addition to the cost of the tickets you buy while using the site.

The Commitment
You aren’t roped into any sort of commitment to go to any of the events they have listed. You only pay for things that you want to go to, so there really is no obligation on your part to sign up. It could even make it easier for you to plan the things you go to, since you can just go to one site and see what’s available without having to search dozens of sites to find out what’s happening on any given night.

Evaluation
They say that the way this works is they’ve partnered with theaters, concert venues, comedy clubs, and sporting venues to get you deals on seats that would have otherwise gone unsold. This is similar to the way that Hotwire says they can offer lower-priced hotel rooms. The ordering process is more streamlined than using Ticketmaster, and there’s no countdown clock making you rush through the purchase and threatening to release your tickets back to the general public, and no CAPTCHAs to type in to prove you’re not a robot.

They do a good job of coordinating several different events for a given demographic, but you’re not getting the full picture of what’s available in your area. By their very business model you’re going to be presented with B list things to see and do. The hottest events and activities don’t need to sell their extra seats, as there is already a high demand for them. It only makes sense that you should be paying less to see something that not many people would be going to unless it was cheap and “something to do”.

If they wanted to be more comprehensive they would figure out how to list events even if they don’t have a relationship set up with it, just so their members know everything that’s available, and not just the small world of what’s available through Goldstar.

Since Goldstar is free to sign up for and browse around, we’re giving it the Thumbs Up rating. You never know if something will strike your fancy once you’re on the inside. It helps to be located in one of their major markets, as that’s when the site functions at its best. If you’re in a part of the country that they haven’t branched out to yet, it can be slim pickings. It can also be nice for when you’re traveling into one of the bigger cities of America and you are looking for things to do on the cheap.

Our Recommendation
We were able to successfully sign up and search around for things to do without the need for a credit card. Of course this does require that you give them your email, so you might start getting messages from them when there are new events listed for your area. Other than that it seems like only a winning proposition from a consumer standpoint, since everything is presented to you in an organized format, and you only pay for things that you want to see.

What do you think? Does Goldstar work or not?

← Previous Does FreshBooks Really Work?
⚅ back to blog
Next →Does the Shark Rotator Vacuum Really Work?