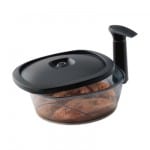 If you love the taste of properly marinated meats like chicken and steak you might have considered getting the Instant Marinator. It says that you can marinate meats in a fraction of the time and have the same taste or better than you would if you had your meats marinate for hours. But does it work, and do the meats taste the way they should?

Overview
Marinating is something that takes a lot of forethought if you want to do it properly. Expert chefs will marinate their meats for hours and hours to get the juices to infuse into the meat itself, providing the best possible flavor throughout.

This is important not only for the taste of the meat, but also for the texture when you eat it. After a few bites, meat can lose its flavor if it just has sauce on the outside. This means you can be chewing and chewing with hardly any flavor left if meat isn’t properly marinated.

The Claim
The Instant Marinator claims that it can marinate your foods in just a few minutes, without the need to let them sit for long periods of time, like overnight. It claims to be able to do this by creating a vacuum environment inside the container, so the marinade has nowhere else to go but into the meat.

The Hype
The hype comes from how quickly it claims to be able to marinate meat. Since they had the boldness to add the word instant to their product name, it immediately creates hype by saying that you can marinate right along the cooking process, and you don’t have to take any special steps or plan hours ahead of time.

The Cost
Instant Marinator costs around $30 and you can currently get it from Amazon and it will ship free with their Super Saver shipping.

The Commitment
You should only get this if you’re committed to using it enough to justify the extra cost. Unless you currently cook a lot of meat and either marinate it the old fashioned way, or wish that you could marinate it but just don’t have the time, you should pass on this item.

It doesn’t make sense to adjust your cooking habits to justify purchasing this gadget. If you don’t eat a lot of meat, or you’ve never considered marinating before, there’s no need to invest in something like this.

Evaluation
Apparently the makers of Instant Marinator think that the vacuum action that their product provides is a way to speed up the marinating process. In fact, all that is instructed to do is place the meat inside the container, and the marinade of your choice, and pump the handle the required amount of times. The theory is by removing the air from the container, it is opening up the meat to allow the sauce to enter.

For the marinade enthusiasts out there, it will be sad news to discover that the Instant Marinator doesn’t seem to do much except sit there and look pretty. When put to the test against ordinary marinating methods, it failed miserably.

If you get it and do a comparison test you’ll notice that even if you just let you meat soak in a Ziplock bag with the same marinade for just a few minutes it tastes better. Just take a tip from the vacuum concept and be sure to release all the air from the baggie. Removing the air really does work at giving the sauce nowhere else to go but into the meat. It’s just odd that it the machine isn’t able to work as well as doing it yourself.

Our Recommendation
Pass on the Instant Marinator and stick to your current marinating methods. This is something that you can perfect on your own without the need for any gadgets. It’s just a matter of trial and error and getting the meat to be the way you want it to.

What do you think? Does Instant Marinator really work?

← Previous Does the Yoshi Blade Really Work?
⚅ back to blog
Next →Do HD Vision Ultras Really Work?