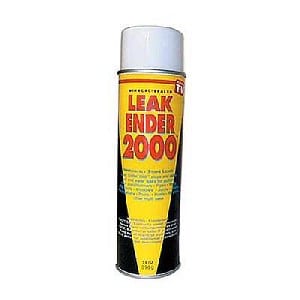 Leak Ender 2000 is supposedly a specially formulated rubber compound that helps to seal leaks and make things airtight and watertight once again. But can it really do all of the things it claims it can, or is this just a bit of clever marketing behind a useless product?

Overview
Leaks are just a part of life, and can happen no matter how well you take care of your home. If you own your home and repairs are up to you, you basically have two choices: do it yourself or pay someone to do it for you. The latter can be rather expensive, and usually only gets called in if we fail in our attempts. That’s why something like this spray can fix is something that gets our attention, because it represents a cheap solution and little effort.

The Claim
Leak Ender 2000 claims that you don’t have to call a professional to stop all sorts of leaks, and also to seal up cracks around your home. They show it being used to fix links under the sink, as well as windows that are letting air in through the cracks, basement cracks, garden hoses, gutters, and a host of other examples. Our testing shows that it won’t work for anything like that, and a close inspection of their chintzy commercial shows that they never actually show it working at all, only creating the illusion that it works.

The Hype
All of the hype needed to get people to order this product is produced by the infomercial. They show it fixing all sorts of things that are common problems in many households, so a quick fix for under $20 sounds like a real winner.

The Cost
You can get a two pack of Leak Ender 2000 for $15 at Amazon. It’s always interesting when a company sells multiples of the same product for no apparent reason.

The Commitment
They make this look very easy, making you think that all you have to do is spray it on and you’ve got it fixed. It actually is pretty easy to apply it as directed. However, it doesn’t work so your time is wasted, and your problem will still remain.

Evaluation
The Leak Ender 2000 failed spectacular during our real world test. It’s always fun taking a product that talks itself up so much in its infomercial and actually using it to see what it really does. Especially with something like this where it is so easy to portray it as a miracle sealer, by simply showing leaking pipes and then showing non-leaking pipes. After closer inspection of their demonstrations on their ad, each one uses clever editing and there’s no actual proof it does anything.

Think about it this way: The company behind this doesn’t really have a lot to lose. It probably costs peanuts to produce each can, maybe a few pennies. They then sell it for several dollars each per can. Many people are not going to go through the trouble of returning it after they use it, they’ll just throw it away and be a little upset for a while. Meanwhile, they just keep selling as many as they can until word spreads enough and people stop buying it, or they run out of inventory and call it a day.

Leak Ender 2000 is the sort of product that you are trying to avoid. It’s easy to get caught up in the excitement of thinking that you’ll soon have a cheap fix for any leaks in your home. A leaky pipe can cause lots of water damage to your home, so getting it fixed in a hurry is a priority for many. Unfortunatley, this is not the answer, and you’re back to square one.

Our Recommendation
We’ve evaluated a couple leak stoppers and haven’t found one that works great every time. Trust us, we’re just as interested in finding a workable solution as you are, and we are in the process of seeking out and finding a product that works. When we do, we’ll be sure to let you know, so Like us on Facebook or subscribe to our YouTube channel so that you get our updates and are the first to know when our review drops.

← Previous Do Mizuno Running Shoes Really Work?
⚅ back to blog
Next →Does Nozovent Really Work?

2 Customer Reviews on “Does the Leak Ender 2000 Really Work?”