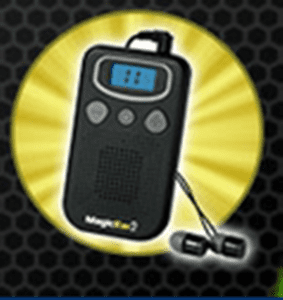 There are a lot of people that have various levels of difficulty when it comes to hearing properly. For some they may not qualify for a standard hearing aid. For others they may qualify and cannot afford it. In either case a solution may be Magic Ear.

Overview
Magic Ear is not a traditional hearing device. It is a sound amplifier, which is similar to what a hearing aid does. With the Magic Ear it is comprised of the earbuds that are gently placed in the ear and these are attached to a miniature sound amplifier. The amplifier picks up the sound and transmits it through the earbuds to the ears. A hearing aid does not have this external device. The amplified in a hearing aid is build into the ear devices.

The Claim
According to the promoters of Magic Ear it will enhance vocal sounds while at the same time cancelling out background noise. This means individuals who have trouble hearing will have some clarity to their hearing once again.

The Hype
The hype about Magic Ear is that it is simple and the biggest hype is that it is inexpensive. Especially when compared to traditional hearing aids.

The Cost
Many are surprised to learn that Magic Ear comes with the amazing price of $19.99 and shipping is included.

The Commitment
About the only commitment that has to be made for Magic Ear is the fact that the external device has to be carried around with the individual using the Magic Ear. This really isn’t a big deal as it fits nicely in the palm of ones hand. Unless someone looked really close they would think that it was a phone.

Evaluation
The Magic Ear almost sounds too good to be true but there is some feedback on the Magic Ear and a lot of it is positive. But first to deal with a slight drawback. If you buy the standard Magic Ear then you are going to have to deal with changing batteries as it is battery operated. But, if you want to get the deluxe version which is rechargeable there is a double offer running for this one costing $49.96 for two with free shipping.One complaint has been that the batteries drain far to quickly. Hearing is not something that one should play around with. Every effort should be made to first get a proper diagnosis of what the actual hearing loss it. Then alternatives should be sought out. That doesn’t mean that the Magic Ear cannot considered because if does seem to be a great alternative for those who are having some hearing difficulty. Not everyone who has some difficulty hearing qualifies for a hearing aid. They may not have reached that stage yet. In that case the Magic Ear may be a great fill in until further resources are needed.

We are prepared to give Magic Ear a try/buy. We suspect that the battery operated version may be somewhat disappointing and this is why the promoters are encouraging the purchase of the battery charged option.

Our Recommendation
An alternative that is a little more geared towards the traditional type hearing aids but not nearly as expensive is the the Hearing Assist which may be worth checking out.

What do you think? Does Magic Ear work or not?

← Previous Does the Motion Pod Really Work?
⚅ back to blog
Next →Does the Shark IONFlex Really Work?