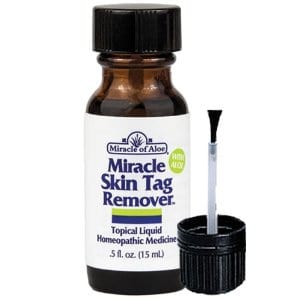 Miracle of Aloe Miracle Skin Tag Remover is a homeopathic solution for skin tags that requires no doctor visit and leaves behind no scar. But how well does this work, and are there any better alternatives out there if it doesn’t?

Overview
Skin tags affect millions of Americans and are one of the most common skin disorders. The good news is that they’re almost always benign and harmless, which means once you get them checked out you can decide to take care of them however you wish. The options are rather limited to having them cut off, or using a type of lotion or cream that is meant to slowly dry them up or quickly burn them off.

The Claim
Miracle of Aloe Miracle Skin Tag Remover claims that it can make skin tags disappear and that it’s made up of plant extracts so that you’re healing your skin tags naturally. It is also billed as a homeopathic remedy, which means that it’s going to contain purposefully diluted amounts of the active ingredient, and will rely on time and repeated use to get the job done.

The Hype
The hype is that there are several different skin tag removal products on the market, and they all say basically the same thing. There are also many homeopathic skin tag removers and this is interesting because homeopathy is just now becoming more of a mainstream way of taking care of different bodily conditions.

The Cost
Miracle of Aloe Miracle Skin Tag Remover is $20 at their official page, plus shipping that ranges from $3 to $5. You can also get it from Amazon for $25 plus free shipping if you order any other item at their site that qualifies. This price point means that you have several options because there are many skin tag creams and lotions that clock in at the same price point and promise the exact same results. The only hang up is that they all get lukewarm responses from users. Finding one that costs $25 and actually works is the kicker.

The Commitment
This is something that you’re going to have to stick with for the long term, and for a long time there won’t be any visible changes. It works slowly, and that is the trade off for it being pain free and scarless. You could go to the dermatologist and have them remove it, but they’re either going to cut it off or freeze it off, both won’t be entirely pain free, and they have the potential of leaving a scar behind. They’ll also be instant, in that you’ll leave with them gone, but it will still take several days for it to heal up, and you’ll have to tend to your wound until it’s healed.

Evaluation
Miracle of Aloe Miracle Skin Tag Remover is homeopathic, which means that there shouldn’t be any side effects to speak of because the product itself is mostly water. The active ingredient shows up in trace amounts only because this is based on the theory that like heals like. They are basically selling a product that is working at a vibrational level, and not so much a physical one. That’s why it takes awhile for it to do anything, and many of the users that gave their review admitted that they didn’t give it long enough to work.

Those that did give it enough time and measured the results were either pleased or not satisfied with the results. This is definitley not for everyone, and if you can’t get behind the idea of homeopathy it’s best to try something else that uses more traditional methods.

The video above shows a guy getting a skin tag removed by a dermatologist. You’ll notice that it’s a very simple and fast procedure, and there is nothing very complicated about it at all. She merely grabs the skin tag with a pair of surgical tweezers and then cuts it right off with a pair of surgical scissors. The area is prepped beforehand, and then afterward she puts on an agent to stop the bleeding and then puts a Band-Aid on it. By having it done professionally you reduce the chances of an infection. The only problem, it may still leave a scar, and it’s not exactly painless.

It appears that Miracle of Aloe Miracle Skin Tag Remover doesn’t work as quickly or effectively as users hoped, and most report having to continue their search for a skin tag removal method that works. There’s no telling if it would work for you, and you may end up wasting a good chunk of time in the process. We understand that you don’t want pain and scarring, especially if your skin tag is in a highly visible area, so we’ve done our best to find you something that has a higher chance of success with similar benefits to this.

Our Recommendation
If time is of the essence and you don’t want to wait around to see if this will work for you or not, try something like Dermatend which provides quicker results but requires a bit more care because it is pretty powerful. The bonus is that it can be used on moles and other skin growths in addition to skin tags, so it’s an all around solution for several common skin conditions.

What do you think? Does Miracle of Aloe Miracle Skin Tag Remover work or not?

← Previous Does the Phantom Saucer Really Work?
⚅ back to blog
Next →Do Shittens Really Work?