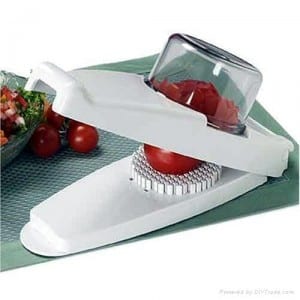 Dicing food is one of the most tedious chores in the kitchen, and Nicer Dicer is being touted as the ultimate fix. The reason dicing is so mundane is because you first have to chop up the fruit or vegetable in question, and then keep right on going until it’s properly diced. Too much and it’s minced, too little and it’s just chopped. Finding that happy middle ground is tough, but does Nicer Dicer really make it easier for you, or does it finish last?

Overview
In the world of kitchen gadgets you have your professional grade equipment, and then you have stuff that you see advertised on TV. There’s usually a big price difference between the two, as well as a big divide in the type and quality of materials used. It’s unlikely that you’ll see a professional chef you something like the Nicer Dicer, but there are those rare products that come in handy for us amateur chefs, so let’s determine if this is one of them.

The Claim
In the infomercial, Nicer Dicer is shown to blast through wedges of onions without causing any tears, and perfectly dicing them into equally sized pieces. The host of the infomercial is shown to be easily pressing down on the machine, and having an easy go of things.

They say that they can chop, dice, and Julienne things like onions, potatoes, and other veggies. One of the nice features of this is that it has a storage container attached right to the top of it, so the food doesn’t go all over the place. It stays self-contained, and it appears that it keeps it out of the way until you’re ready to detach the container and access your food.

The Hype
Kitchen gadgets always come with their fair share of hype, especially those sold on TV. The ads always make them look like a game changer, and have a way of building up a strong desire to purchase them. By taking a step back it’s clear to see that the Nicer Dicer is just a bit of plastic and metal and is not set to win any major awards anytime soon.

The Commitment
The Nicer Dicer is designed to save you time in the kitchen, and alleviate the need to meticulously dice certain foods. In this regard, it should entail no special commitment, and you should just replace your current dicing method with Nicer Dicer. However, it has been documented that it is somewhat of a struggle to chop certain foods, so you will need to commit to learning how to use the device properly, and learning which foods it’s better at than others.

Evaluation
Most people that have tried it said that it isn’t as easy to use as is portrayed in the infomercial. Others have retorted that you must follow the directions carefully, and use it as instructed. By placing too big of an item in the dicing area, the machine can’t work the way it is designed to. Also, by using the small blade set on things like onions, you’re bound to get something jammed into the smaller spaces.

Just like with most kitchen equipment, the Nicer Dicer seems to work better with some foods than others. When compared to something like the Slap Chop, it’s pretty clear that Nicer Dicer falls short as far as ease of use, and design. Eventually there’ll probably be one kitchen gadgets rule them all, but until that day comes you have to be picky and choosy about what you let into your kitchen.

Going to have to give a thumbs sideways on this one, as it just doesn’t have enough positive feedback, and real-world trials leave much to be desired. If you don’t already have something like this in your home, you might want to pick it up, although we would recommend the Slap Chop as the better alternative. There’s really not enough room, or need, to have both in your kitchen

Our Recommendation
We are going with the Slap Chop over Nicer Dicer because both essentially try to solve the same problem, but one seems to do a better job than the other. There are some nice features of the Nicer Dicer, like the attached container, but there are some inherent design flaws that make Slap Chop the better choice.

What do you think? Does Nicer Dicer work or not?