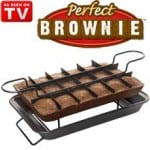 Everyone in the house loves brownies, but wouldn’t it be nice if you had the Perfect Brownie Pan? With this you could be a Brownie Master and do all sorts of neat things that your whole family will love.

Overview
Baking brownies can be a real pain. Sure they make the house smell great, and they taste amazing once you’re finished, but the hassle can prevent you from enjoying them as often as you’d like. Between the brownies getting stuck to the pan, and then them getting all stuck to the pan when you try to serve them, can put a damper on the yummy fun.

The Claim
All you have to do is make your favorite brownie mix and you’ll make a perfect tray of brownies, every time, already cut and ready to serve in their patented tray. The whole thing elevates and leaves the brownies ripe for the picking.

Each brownie gets its own edge, so you don’t have to worry about someone eating up all of the corner and edge pieces, and only leaving the gooey middle pieces. This is because the inserted piece that cuts the brownies up also serves as a cooking devices that browns and crisps the edges.

The Hype
Brownie lovers won’t think that the Perfect Brownie Pan is hyped, because they’re mad for brownies. But at the end of the day, it is just a singular food item that we’re talking about here, and not something that is going to cure a major disease, or change the world as we know it.

It will, however, make the world a happier place, because people love brownies, and anything that makes them easier to make, contributes to the good of the planet. If you serve them to kids and their friends, you will be helping to instill good feelings in them, and make them think that this is a good world that we live in, and one day they may grow up to run the world and transfer those good feelings to public policy. You just never know.

The Cost
The Perfect Brownie Pan clocks in at the usual television product price of $19.95 plus shipping and handling. They don’t let you buy just one though, you have to buy 2, which includes paying separate shipping and handling. Unless you’re going into brownie business you likely don’t need the second unit, so you can find someone to go in halfsies with you and split the cost.

The Commitment
If you already make brownies and other baked goods for your family on a regular basis, then you don’t need any further commitment, and it will probably make your life easier. However, if you only wish that you could have more dessert nights with your family, you’ll have to commit to buying the brownie mix or making it from scratch if you buy it. It would be a shame to buy it and not use it because you don’t get into the habit of baking.

Evaluation
There are a few innovative features of the Perfect Brownie Pan. You can tell they sat down and brainstormed the worst features of making brownies and tried to solve them. One feature is that they stick to the pan and you can’t get them out when you try to serve them.

Another one is that there are preferential pieces on the corners and edges and the second rate center pieces get left behind.

By making it so that you don’t have to cut the brownies at all, and that each brownie gets cooked in its own little square, they’ve knocked out two of the worst features of making brownies.

The serving tray pushes it to a new level by making it so easy to serve and display your wonderful brownie creations. Also you aren’t limited to just brownies, you can make mini cakes, cornbread, and any other type of baked good that would benefit from this special tray.

Yep! Pour the brownie mix into the pan, and then drop the divider into in and you can pop it into the oven. When they come out of the oven it takes a little push and they pop right up on the serving tray and look amazing.

Perfect brownies, slight crisp on the outside, moist and delicious on the inside. Bravo!

Our Recommendation
Brownies are great for family bonding, so why not pull the trigger on this buying decision and grab yourself a Perfect Brownie Pan. Find a buddy to go in on it with you and you’ll reduce the total cost with their two for one offer. Have fun making yummy treats and become known as the fun mom or dad on the block.

What do you think? Does the Perfect Brownie Pan really work?

← Previous Does the Perfect Meatloaf Pan Really Work?
⚅ back to blog
Next →Does Keypout Really Work?

12 Customer Reviews on “Does the Perfect Brownie Pan Really Work?”