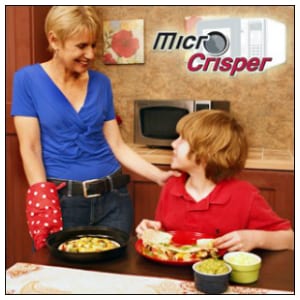 The Perfect MicroCrisper is trying to salvage your leftovers, especially the ones that don’t quite taste right when you try to reheat them. This can help save money by making leftovers a viable meal option, and allowing you to get two meals in one from your favorite restaurant, or even from pizza night. But does it really work as well as it’s shown, and will you really be able to crave microwaved food?

Overview
When the microwave first came out it was an instant hit. People marveled at how fast it cook cook and reheat food, since the only alternative up until then was a conventional or toaster oven. There were a few drawbacks to it, but the convenience level was so high that they were overlooked and lost in all of the hoopla. It quickly became a default item in homes across the country, and still finds a place in most homes today.

The Problem
Many foods don’t lend themselves to being reheated, which is why leftovers don’t really rank highly on people’s list of favorite foods. When you try to microwave food that’s already been cooked and stored in the refrigerator overnight it changes its quality, either becoming too soggy, or hardening up and becoming inedible. Frozen foods usually end up too soggy, and the same thing with fried foods. French fries are notorious at being a food that just can’t be reheated and eaten later.

The Claim
The Perfect MicroCrisper says that it can bring foods back to life that would otherwise become soggy or overcooked messes. Even though it’s made out of medal, it’s microwave safe, and provides the right surface for cooking and crisping foods, getting them just right. They also include a grill, which attempt to bring the qualities of a George Foreman grill to the microwave, removing the need to wait for it to heat up, but still getting grill marks and cooking both sides at once.

The Cost
The total Perfect MicroCrisper set comes with the MicroCrisper itself as well as a Grilling unit and an oven mitt for $36. They start it off at the advertised price of $19.95 but then there’s the shipping charges for both units and that’s what gets the price to nearly double. But when you look at it as $18 each including shipping it’s not so bad. When you think of all the food you’ve tossed in the last year because it couldn’t make a comeback, that really adds up, and this could pay for itself with just a few reclaimed meals.

The Commitment
Compared to preheating the conventional oven and waiting for your food to reheat, you could already be eating your meal. It’s just as easy as using a microwave safe plate, but because of the surface the results are drastically different. So as long as you already incorporate your microwave in your regular cooking, this won’t require any extra commitment on your part, and might even save you from having to make new meals, if you can make the most out of the food you prepare or order in.

Evaluation
When evaluating the Perfect MicroCrisper you have to look at both the crisping unit and the grilling unit as a whole, since they’re both included in the final price. The real invention here is a microwave safe medal, because we all know that you can’t put medal in the microwave. By coming up with a nonstick metal surface that can actually be put in the microwave, and is easy to clean they are making a strong case to start eating leftovers again. Foods that users have said this works best on: Cold pizza, chicken wings, and anything with cheese in it.

One thing to keep in mind is that microwaving food is not really healthy for you. It works great in a pinch but you wouldn’t want to rely on it for your daily cooking method. Even though they say that the medal that’s used on this is microwave safe, there’s obviously been no long term studies about the effects it has on foods and if it’s safe to eat. That’s why you should use this sparingly and make sure that you don’t cook foods for a long time on it. It’s likely fine for quick reheating jobs.

The Perfect MicroCrisper is getting our Thumbs Up review for the way it gets food to crisp up and actually taste good its second time around. The feedback from users has been positive, with many saying it’s worth the price and the food tastes good. Of course it’s not going to taste as good as it does the first time, but being able to enjoy it again is a big improvement over the usual substandard results you get from ordinary microwaving.

Our Recommendation
If you find that you tend to accumulate leftovers and then end up throwing them out because there’s no good way to reheat them, this is an item to put on your wishlist. At a price of $36 for two pieces shipped to your door, it’s not a bad deal, and gives you some versatility, allowing you to cook a wide range of foods quickly and easily. Be sure to use the oven mitt that comes with it, or your own as the pan can get very hot, and it’s easy to burn yourself with it.

What do you think? Does the Perfect MicroCrisper work or not?

← Previous Does Réjuvasea Really Work?
⚅ back to blog
Next →Does The General Really Give Anonymous Quotes?

9 Customer Reviews on “Does the Perfect MicroCrisper Really Work?”