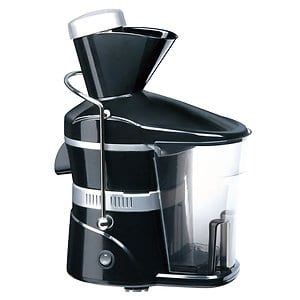 The PowerGrind Juicer from Jay Kordich has been around in many incarnations for several years now. The latest is the Pro model which boasts a powerful motor than can grind up all sorts of foods, and provide you with pulp free juice that is full of nutrients and vitamins. If you’ve ever seen one of the infomercials you were probably convinced to buy it, but wanted to see how it really works when used in real people’s kitchens. That’s what we set out to discover.

Overview
It’s hard to deny the value of fresh fruit and vegetable juice. It’s a way of getting all of those vitamins and nutrients without having to eat a basket full of greens. But there are a lot of drawbacks to making that juice that keeps most people away from the juicing lifestyle. First it can be expensive to buy all of those fresh fruits and vegetables, and then when you juice them up a big portion of it ends up as pulp that you’re supposed to throw away. The yield of juice compared to the food you put in is enough to turn most away.

The Claim
The PowerGrind juicer comes with its fair share of claims, including being able to produce more juice packed with more nutrients than other juicers you can buy. They say you can even make almond and soy milk with it. They’ve designed it so that it’s easier to put the food into it with a double chute, and they say the motor is so powerful that it never gets bogged down. It’s supposed to be relatively quiet to use, and easy to clean since it comes apart and the parts can go in the dishwasher.

They go on to say that it doesn’t take much space up on your counters and that you can make those green smoothies that everyone is talking about because it can even grind up leafy veggies. There’s a larger pulp basket on this one so you don’t have to empty it as much, and the blades are made out of surgical grade stainless steel so they should last a long time. And if you’re worried that you won’t know how to use it there’s an instructional DVD that comes with it so you can simply follow along.

The Hype
Jay Kordich provides all the hype that a product could ever need with his 30 minute long infomercials where he goes on and on about the goodness of juicing and drinking juice in your diet. He’s also famous for throwing just about anything in to the juicer to show that it can grind up whatever you put in. He even put in apples without removing the seeds, which led some to worry since they contain trace amounts of cyanide.

The Cost
The cost is what trips many people up, since it goes for $300 at Amazon. And that’s a deal because they’re trying to get nearly $400 at the official site. It’s definitely one of the pricier juicers, almost as expensive as the Vitamix. It’s odd that manufacturers are still charging these kinds of prices since the Ninja system came out that performs so well with a $100 price tag.

The Commitment
If you’re going to spend so much on a juicer you’re going to want to get your money’s worth and use this as much as possible, perhaps even daily. Since you can’t really store fresh squeezed juice for any length of time this is a product that you really could incorporate into your daily routine.

Evaluation
The PowerGrind Juicer is a quality unit and few can argue with it’s power and how well it’s put together. But what’s really under evaluation here is its performance and the overall experience of using it in a practical way. After all, if it’s not easy to use, or has some inherent drawbacks to it, you won’t use it as much as you planned and it will end up being a product you regret getting. Overall people seem very pleased with the way it works, and have said that they use it quite frequently.

Every juicer has its share of pros and cons, and it’s unlikely that you’ll find one that you’re totally happy with, no matter which one you go with. It’s all about lining up with as many of the core features that matter to you and picking the one that makes the most sense. If you’re resonating with the features and benefits of getting Jay’s juicer then it will likely be a good buy for you.

The PowerGrind juicer is getting our Thumbs UP rating since it does work as promised. But there are better options out there for juicing that also include other functions so you can get more for your dollar. We’re not fans of the way that it creates so much pulp, since there’s no reason to throw away a bulk of the food that you put in it. It’s possible to make a glass of fresh apple juice that uses all of the apple you put in.

However, if you want a juicer that takes out all of the pulp and leaves you with completely pulp free juice this is the way to go, since the leftover pulp is very dry, meaning it pulls out the majority of the juice and moisture.

Our Recommendation
When it comes to juicing why not blend up the entire piece of fruit so you’re getting the nutrients plus the fiber it contains? That’s the theory behind products like the NutriBullet and the Vitamix. And the Ninja blender has an impressive amount of power and is very cost friendly, satisfying the majority of those that use it, and not costing an arm and a leg. When you consider a blender or a juicer you not only have to think about the up front cost, but also how much it’s going to cost you to buy all of the ingredients that go into a smoothie or fresh juice.

What do you think? Does PowerGrind Juicer work or not?

2 Customer Reviews on “Does the PowerGrind Juicer Really Work?”