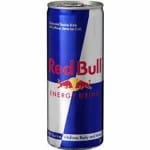 Red Bull is the best selling energy drink, and current market leader in the industry. It is a worldwide phenomenon, and most people that try it experience its effects. There is little doubt that it will give you a rush of energy, the real question is should you take it, and what is it doing to your body?

Overview
Red Bull started as a knock off of an energy drink originally found in Thailand. The company behind it modified the original ingredients so that they would appeal to the western palette and renamed it from its original name. The design of the can and the logo is similar, but they obviously needed to come up with a new slogan and marketing campaign to get people interested in it.

The Claim
They say that Red Bull “gives you wings” and it is meant to provide a burst of energy when you drink it. It is basically responsible for making the energy drink market as big as it is now and sparking a host of knock-offs and competitors in a previously defunct market. They don’t make any big claims, like how much energy it will give you, or how long the effects will last. They also don’t provide many warnings as to what sort of side effects you might experience.

The Hype
The hype comes from the advertising mixed with so many people drinking it as a pick me up. Many people have seen or know of the cartoon commercials that feature a guy getting into some sort of trouble, and then drinking a Red Bull, sprouting a pair of wings, and getting out of danger. There is also the Red Bull air race, as well as the Flugtag, where people try to make flying devices and then propel themselves off of a cliff as a promotion for the drink.

The Cost
Red Bull isn’t that much more expensive than other soft drinks, but it does come at a premium. You can usually find a deal at the local convenience store when you buy 2 at the same time, or you can pick them up from the grocery store in a 4 pack for a few dollars per can.

The Side Effects
Red Bull may give you more energy for a short amount of time, but it also comes with its share of side effects that you can expect from taking it. These range from mild annoyance, to potentially severe.

The first side effect that you open yourself to is putting on extra weight. Red Bull is designed to give you energy, but if you’re using that energy to sit at your computer at work and get your paperwork done, you’re not burning off the extra calories and carbs from all the sugar it contains. They do make a light version, but it is nowhere near as popular as the original, and tastes horrible.

Another side effect you are susceptible to is cardiac problems, or heart trouble. By putting so much pressure on your heart you may experience palpitations, irregular heartbeat, or if you’ve had previous heart trouble you may be pushing yourself towards a heart attack. Your body is not meant to drink things like Red Bull, because it is an unnatural stimulant that the body does not know how to handle. It’s doing its best to process the toxins in Red Bull, and that includes speeding your heart up to try and process things more quickly.

You may also experience higher levels of anxiety, and this is because the physiological response to Red Bull is very similar to having a panic attack or anxiety attack. An increase in heart rate, shortness of breath, and other symptoms like being extra nervous or not being able to sleep. This is from the high levels of caffeine that are in Red Bull. They say that you get the feelings of energy from the Taurine that’s in it, but there is far more caffeine in each serving than there is Taurine.

Perhaps the least talked about negative aspect of taking Red Bull is that it dehydrates your body. Many people don’t understand the importance of having a properly hydrated body, and this is actually the reason why you feel like you don’t have any energy. You are most likely dehydrated. Any other beverage besides water will cause dehydration, but especially those that contain caffeine, sugar, and are carbonated. Red Bull is all of these things, and while you might get a short-lived high from it, afterwards you will feel much worse than you did before you took it, as your body has to recover from it.

Evaluation
Red Bull is really just a highly sugared, highly caffeinated drink loaded with chemicals. Nothing in it provides any health benefit to the body, and in fact it actually works to make you less healthy with each sip. Of course it is known to give you a boost, but that boost is usually followed by a severe crash, which products like 5 Hour Energy were invented to prevent. There is no reason at all to take a Red Bull, and there are much healthier ways to boost your energy level.

Red Bull works at giving you more energy, because it uses ingredients that have been proven time and time again to speed up your heart rate and give that energetic feeling. With the levels of caffeine and sugar in it, it’s just as addicting as some drugs, and you can easily get hooked on the energy you get form it, as well as the sugar and caffeine. Many people get to the point where they say they can’t function at their best without it.

Our Recommendation
Considering how much of a strain Red Bull puts on your body, we don’t recommend taking. It’s a very toxic product that should definitely not be used as a daily energy booster. We also recommend against mixing it with alcohol, as this puts a double strain on your circulatory and other systems.

What do you think? Does Red Bull work or not?